The trail system at the Martin Van Buren Natural Historic Site leads to meadows, a stream, and marshland, and highlights notable trees, shrubs, flowers, and wildlife. 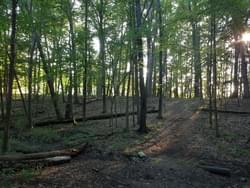 The Martin Van Buren Nature Trail (MVB) comprises 70 acres across from the Martin Van Buren National Historic Site and home of our nation’s eighth president, Lindenwald. Visitors to Lindenwald can enhance their visit by walking the trail and witnessing an environment similar to what the former President would have enjoyed in his retirement. The MVB Trail is owned by the Friends of Lindenwald, a non-profit, educational organization.

The four trails that cut through the park are organized by a color coded trail system. The start and backbone of the trail served as a path and right of way for over 100 years and is bordered by old maples, ash and oak trees. Trails break off of the old pathway and provide a loop back to the main path. The four trails total 3.7 miles in length and provide an ideal location for hiking and walking, and is a favorite site for families and dog-walkers. Hikers can enjoy forest, farm, and stream views, while hiking along rolling hills.

The Trail is part of the Dutch Farming Heritage Trail which was a project of the Columbia County Historical Society, the National Park Service, the Friends of Lindenwald and the Albany Hudson Electric Trail group from Kinderhook. The Dutch Farming Heritage Trail connects the historic Van Alen house (Dutch farmhouse built in 1727) and the Ichabod Crane Schoolhouse (mid-19th century schoolhouse) through areas of Roxbury Farm (an organic farm whose owner has a special relationship with the NPS to use his land for interpretation of farming methods), down a historic portion of Old Post Road, and to the parking lot of the Martin Van Buren National Historic Site.

The Trail is also used by local Cub Scout Pack 117 (Niverville) for day hikes and Boy Scout troops 114 (Valatie) and 13 (Kinderhook) for camping and working toward merit badges. Scouts from Troop 114 have done several Eagle Projects at the site, including digging a spring for wildlife use, construction of an outhouse, and construction of several benches along the trail for hikers. The Scouts have also done several community service projects on the property including removal of dead trees and trees across the trails, remarking trails and clearing the field areas. The Friends of Lindenwald are working with Troop #114 to build a permanent camp-fire pit. The MVB Trail is also used for environmental education. 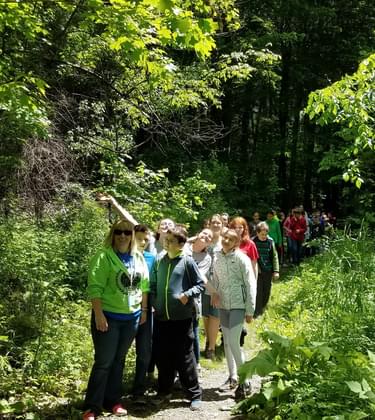 For the last three years the Friends of Lindenwald has sponsored an Environmental Awareness Day for 6th graders in June. The program begins at Lindenwald with a talk about Van Buren’s farm and the agricultural methods he used. The group moves to the MVB Nature Trail where the Columbia Greene County Cooperative Extension and other local environmental educators interpret different environmental issues for the students at 4 -6 stations. Students rotate through 20 minute sessions throughout the Park. Currently two schools, (Ichabod Crane and Chatham Central) participate and more schools are expected to participate next year.

In the 1970’s Columbia County owned the 70 acre site and proposed putting a landfill there. At the same time, local groups were negotiating with the National Park Service about acquiring the 8th President’s home as a National Historic site. With the acceptance of the federal designation and strong opposition from the community and local elected officials, the County reversed its decision in the early 1980’s and approached Cornell Cooperative extension about finding a 4H club to turn the site into a nature trail. In 1991, the Friends of Lindenwald took over the management and maintenance of the trails. Acquisition of the trails from the County was attempted in 1991 but was only accomplished in 2013.

Once the Friends of Lindenwald took possession of the property it prepared a budget and hired a Natural Resource Consultant to write a trail management plan. In June of 2017, the Trail received New York State Greenway status and in August the first of a 3 phase management plan was complete. Over time and with active use and flow of a seasonally vigorous stream, the trail system has been impacted by sheet and rill (washout) erosion. Implementation of the management plan to reduce this erosion as well as a reduction of trail hazards (tree roots, dead trees over the pathways) will increase the quality of the recreational experience. The removal of dangerous dead trees was recently completed in October 2017.

To minimize trail erosion and make the trail more accessible, the plan calls for the construction of bog bridges which will reduce the instances of patron exacerbated erosion by 80% in the first year. Implementing location specific erosion control methods (e.g. improving and building new culverts) will lead to a 50% reduction in instances of sheet and rill erosion.

For more information on the MVB Trail, visit the The Friends of Lindenwald website.