The US Army Corps of Engineers manages the Kaskaskia River Confluence Trail which provides access to the shoreline at the confluence of the Kaskaskia and Mississippi Rivers. 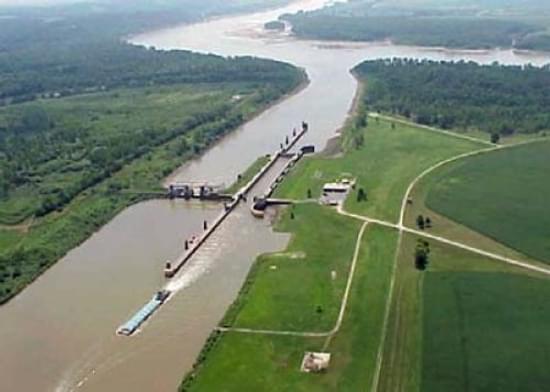 The Kaskaskia River Confluence Trail is a peaceful recreation trail nestled in the heart of historic Southwestern Illinois south of St. Louis, MO. The trail is located at the U.S. Army Corps of Engineers, Kaskaskia River Project and provides access to the shoreline at the confluence of the Kaskaskia and Mississippi Rivers. This is the only public river access site on the banks of the Mississippi River for 100 miles in the State of Illinois. Visitors can take a step back in history, take in the beautiful scenery or just enjoy the rhythmic flow and the two rivers merging together.

The Kaskaskia River Confluence Trail was developed as a recreational trail by the U.S. Army Corps of Engineers with the help of its partners and received National Recreational Trail recognition in 2010. This trail opened new partnerships with local communities and stakeholders in the area who have assisted the U.S. Army Corps of Engineers in the development of the recreation trail. These partnerships include Tower Rock Stone, A& K Rentals, Randolph County Board of Commissioners, Randolph County Historical Society, Kaskaskia Church Council, Liberty Bell of the West Chapter, National Society of the Daughters of the American Revolution, Center for French Colonial Study, Illinois Historic Preservation Agency, and the Lower Kaskaskia Stakeholders, Inc. The trail supports the Corps Missions (recreation, environmental stewardship, navigation, flood risk management) and promotes the values of the river and key historical significance of the region.

The U.S. Army Corps of Engineers staff located at the Kaskaskia River Project has been intensely involved in the design and maintenance of the trail and will continue to have an instrumental role in maintenance and development for the future. Due to its close proximity to the Kaskaskia and Mississippi Rivers flooding is a major concern; therefore, plans for the trail include removable displays, flood proof stone amphitheater/overlook and asphalt trail surface that can be cleaned off after water events.

History of the area

The area around the Kaskaskia River Confluence Trail has always been valued by its locals for its vast historical importance. This area was settled and ruled by the French in the 1600’s -1700’s. French influences can still be seen today in places such as Fort de Chartres in Prairie du Rocher, IL (1753), Fort Kaskaskia/Pierre Menard Home in Ellis Grove, IL (1802), Ste. Genevieve, MO (1735), Kaskaskia Liberty Bell Shrine and Immaculate Conception Church, founded by Pere Marquette in 1675 on modern day Kaskaskia Island, IL. This area was also very important during the revolutionary war. On July 4th 1778, George Rogers Clark liberated the town of Kaskaskia from under British rule. This helped establish the western boundary of the United States to be the Mississippi River at the end of the Revolutionary War. In 1803, Lewis and Clark recruited and picked up men from the Kaskaskia Garrison to join the Discovery Expedition. In 1809, Kaskaskia was declared the First state Capitol in Illinois (Kaskaskia Island, IL).

The Kaskaskia River Confluence Trail is currently 12 feet wide and 0.4 mile long, one way but is planned for future expansion. The trail provides outdoor recreation needs for walking, bicycling, jogging, a leisurely stroll, wildlife watching, hunting in designated areas and access to fishing at the confluence of the Kaskaskia and Mississippi Rivers. A variety of freshwater game fish such as, largemouth bass, crappie, bluegill, catfish, white bass, and walleye are regularly caught in these rivers. For those wishing to observe and connect with the wonders of the great outdoors, this trail goes through a high quality bottomland forested area with open areas providing habitat for native flora and fauna.

Some of the features of the Kaskaskia River Confluence Trail are the outdoor removable interpretative displays, a trail brochure and a flood proof stone amphitheater and fire ring at the confluence for educational programs and other various outdoor activities. A brochure is being developed to create a diversity of information that will educate the public on environmental stewardship, Corps mission, and historical events and landmarks throughout this part of the Mississippi and lower Kaskaskia Rivers. This trail is a wonderful addition to the area since the amphitheater and trail will provide a place for local schools and organizations, as well as local and traveling individuals, to use and see the importance and beauty of the area. This area will continue to serve all who take an adventure to the Kaskaskia River Project.

Starting on Illinois Route 3, turn onto Roots Road at Ellis Grove and proceed for 3.4 miles. Turn left on to Lock and Dam Road and continue for 2.4 miles to the signed Kaskaskia River Project access road on the left. Just on the other side of the levee, on the right is the signed Lower Boat Ramp access road that leads to the trailhead parking lot. The trail begins on the southwest side of the parking area.