The popular cross-town pedestrian and bicycle trail in downtown Newark has an eight-foot wide hard surface and is lighted for 24-hour use. 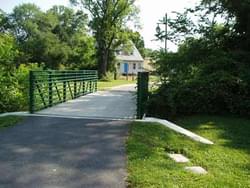 The James F. Hall Trail is named for the late and long-time Newark Parks and Recreation Director. The trail is 1.76 miles long and runs east to west across the City of Newark in New Castle County, Delaware. Located adjacent to the Amtrak and Penn Central rail lines, the trail is a unique example of the rails to trails concept.

For its short length, the trail is jam-packed with a variety of distinctive features and is itself a popular downtown destination. Open for public use since 2003, the trail passes through three City parks which feature a variety active recreation facilities including tennis and basketball courts, children’s playground equipment, picnic pavilions, a softball field and parking. Each parking lot provides direct access to the trail.

It also passes through a pristine wetland area and the Old Newark Train Station, which is home to the Newark Historical Society. The trail features footbridge crossings of two tributaries of the White Clay Creek, a designated National Wild & Scenic River.

The trail provides safe and easy access to the outdoors for more than 28,000 residents of Newark and the surrounding suburbs, 20,000 students, faculty and staff of the University of Delaware with access to student housing units, a child care facility, the Delaware Technology Park , several residential neighborhoods, the College Square Shopping Center and is within two blocks of three local schools. 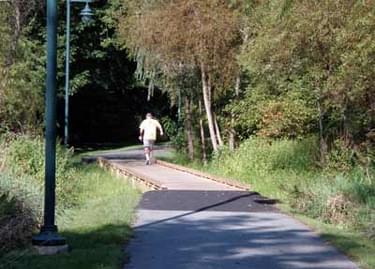 The trail is lighted for 24 hour use

The trail is hard surfaced and relatively flat, ADA accessible, allows for intermodal access to Amtrak and SEPTA rail service, lighted for 24 hour use and is equipped with emergency call boxes which are link directly to the local police department dispatch center.

A unique features of this urban trail is that one can travel the entire length without having to stop to cross a street and it can be accessed from several streets that dead end at or near the trail. The trail was constructed on properties owned by the City of Newark and permanent easements provided by the University of Delaware and Amtrak. Newark’s Parks and Recreation Department manages and maintains the trail.

While the trail is used predominantly by individual and family walkers, joggers, bicyclists and roller bladders, several charity run/walk and bicycle events are conducted on all or part of the trail each year.

In addition to now being a National Recreation Trail, the Hall Trail recently became part of the East Coast Greenway Trail System, a Atlantic Coast greenway corridor linking Maine to Florida, and was an important element of consideration for Newark’s recent designation as a Bicycle Friendly Community. 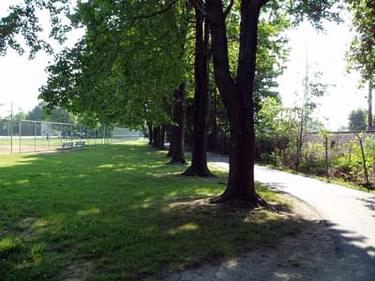 Thanks are due to the many partners that helped make the trail a reality. The City of Newark partnered with the Newark Bike Committee, University of Delaware, Amtrak, and Delaware’s Department of Transportation and Department of Natural Resources and Environmental Control to make the project happen.

The Newark Bike Committee was an early driving force, developing the trail concept in 1996. $1.95 million in funding was provided by the City of Newark, Federal Highway Administration TEA-21 Program, Delaware Land and Water Conservation Trust Fund, and Delaware Department of Transportation.

A new 2-mile trail addition, which will be known as the Pomeroy and Newark Rail Tail (currently under development), will connect to the Hall Trail extending north through Newark into the White Clay Creek State Park and Preserve in northwest Delaware and southern Chester County, Pennsylvania.