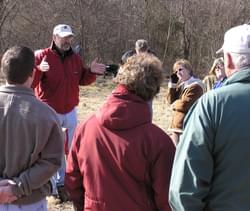 While it is recognized that there are some differences in multi-use trail management due to location, various environmental factors, types of usage, etc., this study revealed many similarities among agencies surveyed with respect to both problems and solutions in user-group cooperation and resource management.

In 1995, multi-use trail-managing agencies in northeastern Illinois and 14 other states were surveyed with respect to current policies and recommendations for:

1. Managing conflict among trail user-groups; and

2. Controlling adverse resource impacts associated with trail use and/or misuse.

Survey data on 28 multi-use trails in northeastern Illinois and on 43 trails in other states were analyzed. Through the use of a different questionnaire, input was solicited from trail user, trail advocacy, and conservation organizations on their policies concerning multi-use trail issues.

Data from the trail-managing agency questionnaire revealed that, according to the majority of survey respondents, user-group conflict did not occur on a frequent basis; however, approximately 50% of northeastern Illinois (NEI) respondents and 35% of respondents in other states (OS) reported conflicts occurring on a moderate or more frequent basis. Sixty-one percent of NEI and 44% of OS respondents also evaluated conflicts as having increased slightly, or more, during the previous two to three years.

There was a high similarity among all respondents to most of the survey questions. Similar user-group conflicts occurred in all geographic areas of the country represented by the survey (with the exception of cross-country skier/ snowmobiler conflicts).

Overall, the most prevalent user-group conflicts were perceived to be:

1. pedestrian/bicyclist (both tour and mountain bike)

The three most important social/behavioral causes of user-group conflict were perceived to be:

2. "incompatibility of user-group values (e.g. attitudes toward nature, appropriateness of trail use activities)"

Respondents from all states surveyed assessed the following as the most important measures to reduce conflict:

1. "more education of user-groups by user-group organizations and media on proper trail use and trail etiquette" was rated as the most important by the majority of all respondents ;

2. "more education to be provided by trail-managing agencies;"

3. "more brochures, maps and other trail-related information for dissemination to trail users;" and

4. "more communication between trail-managing agencies and user-groups." Both NEI and OS respondents rated "more patrolling or monitoring" as among the next most important measures needed to reduce conflict on their multi-use trails. In general, light-handed measures, i.e., education, communication, etc., were rated as the most important ways to reduce conflicts among trail user-groups.

Approximately 50% of all respondents indicated that their agencies now provide some type of formal trail user education; however, most of this appeared to be in the form of brochures and signage. Twenty-eight percent of OS respondents advised that they provide other types of education including presentations by park rangers, barricade programs, bicycle rodeos, group meetings with agency staff, forums, nature or awareness programs, and public relation campaigns.

Additional recommendations made for management of user-group conflict included:

1. involve user-groups in the decision-making process

2. use of volunteer patrols

NEI and OS respondents also evaluated overall environmental impacts to the trail path and adjacent lands due to trail use activities in a similar fashion. The majority of all respondents assessed some minor problems due to trail use activity on their sites. Forty percent of the NEI respondents evaluated overall impacts as causing moderate or major problems, such as soil erosion, soil compaction, vegetation damage, off-trail abuse, impacts from activity on wet trails.

Recommendations for controlling adverse impacts of trail use included:

3. education of the trail user.

Survey respondents also provided some recommendations on trail design. Some emphasized the importance of adequate trail width. Those who recommended a specific width suggested that paved trails should be either 10 or 12 feet wide. Separate paths for certain trail uses, primarily equestrians, were also recommended by several respondents. Others emphasized the importance of appropriate signs and proper trail construction&emdash; i.e., appropriate surface material for the specific type of trail use, and consideration of the requirements of different trail user groups.

Due to the controversy surrounding mountain bicycle use in some areas of the country, one section of the questionnaire addressed this issue. Although survey data revealed similar concerns with mountain biking (e.g., user-group conflicts and resource impact problems) in many of the areas of the country in which trails were surveyed, the majority of both the northern Illinois and the out-of-state respondents described few specific management policies directed toward this use.

However, a number of agencies are in the process of developing such policies or are at least thinking about doing so. Only four agencies indicated that they have designated some single-track trails for mountain bicycle use, although all of these trails also permit hiking or pedestrian activities. Several agencies mentioned use of a permit system for mountain bicyclists.

Follow-up contacts were made with a number of trail managing agencies, specifically with respect to off-site trail user educational programs and the use of volunteer trail patrols. One agency, the City of Phoenix Parks Department, conducted a "Don't Be A Trailblazer" campaign in conjunction with National Trails Day in 1994. This included on-site as well as outreach programs, and presentations to trail clubs and local businesses. A multi-use recreation video, entitled In Their Shoes, has also been produced by the Arizona State Committee on Trails with the support of Phoenix Parks and other groups. The video promotes a "multi-use trail attitude."

Seven agencies surveyed reported using volunteer trail patrols, in addition to their formal trail patrols. Two of these programs are the Volunteer Trail Courtesy Patrol of the Lake County Forest Preserve District in Illinois, and the volunteer patrols (bicyclist, equestrian, and hiker) of the East Bay Regional Park District in Oakland, California. Both are credited with helping reduce conflicts among trail user-groups as well as controlling adverse resource impacts.

The trail user-group and conservation organization questionnaire revealed a wide range of policies and positions on user-group conflict and resource impact issues. Of particular interest are the codes of ethics, or rules of the trail, which are advocated by bicyclist, equestrian, and snowmobiler organizations. It is apparent that many user-group organizations are interested in promoting responsible and courteous trail use among their membership.

Examples of promoting appropriate trail use include the International Mountain Bicycling Association's actively promoted "Rules of the Trail" for cyclists with the help of 95 companies, as well as local clubs. The International In-line Skating Association has a program to educate in-line skaters on responsible and safe skating techniques. The Backcountry Horsemen of California are also involved in an effort to educate backcountry stock users on low-impact techniques. Since some bicycling advertising has contributed to negative images of mountain bicyclists, Specialized Bicycle Components reported it no longer plans to "use ads with mud" for its mountain bicycle advertisements.