The Town of Halfmoon manages a six-mile segment, bordered by farm fields, wetlands and wood lots, of the 58-mile Canalway Trail corridor, which runs along historic towpaths from Waterford to Whitehall. 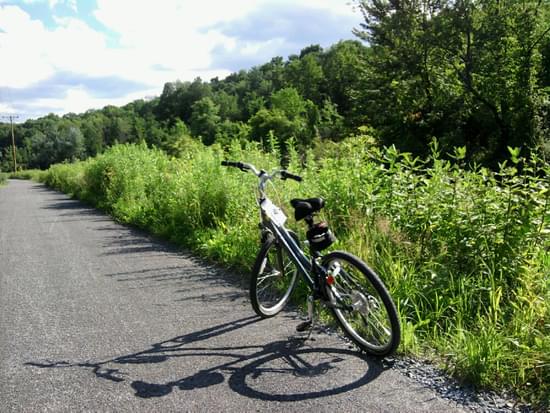 The Town of Halfmoon owns the Champlain Canalway Trail corridor within the Town. Approximately two miles of the trail is an improved, stone dust trail that is eight feet wide. Trailhead parking is available at the northern end of the improved trail segment. To the north and south of the improved segment are two-mile long segments of unimproved trail. The Town has plans to construct multi-use stone dust trail segments for the entire six miles of trail within Halfmoon.

The Halfmoon Trail segment connects two, established communities, namely the Village of Waterford and the City of Mechanicville. Thus, the Halfmoon segment of the Champlain Canal Trail serves not only Halfmoon residents, but also draws from these two neighboring communities. When the connection is made with the Hudson River blue trail, the Town expects blue trail users to also take advantage of the Champlain Canal Trail.

The Town’s Trails Master Plan led the way to obtain grants from the NYS Canal Corporation and the Department of Transportation to construct multi-use trails. The Crescent Park Trail on the northern shore of the Mohawk River, previously mentioned in this Special Report, was constructed with grant funds. Also along the Mohawk River, the Town of Halfmoon has partnered with neighboring Clifton Park to link Halfmoon’s Crescent Trail with Clifton Park’s Vischer Ferry Trail. The Towns have acquired a Federal Highway Administration grant to construct the “missing link” between the two Town’s trails. An engineering firm was selected for the project, and the project was completed in 2011. 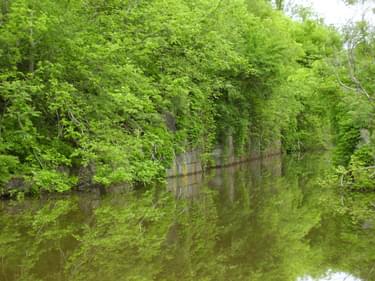 The Town of Halfmoon segment of the Champlain Canalway Trail contains many historic aspects. Much of the original (1823), canal stonewalls remain and are visible. Old Lock #7 and Old Lock #8 of the Historic Champlain Canal have deteriorated very little over the last 185 years, with the entire stone masonry locks intact. Indeed, the location of the stone seat-beds for the lock gates are clearly visible details of the structures.

Also along the Town’s Champlain Canalway Trail is a well-preserved example of a waste, water weir. The waste, water weir is used to channel excess water from the canal during times of high water levels, such as the spring thaw or heavy rains. The waste water weir is a magnificent example of ingenious 19th century engineering, which relies on gravity to channel the excess water from the canal, since modern pumps and electricity were not available to perform the task. In additional feature of the 1823 Canal that remains in good condition is a stone arch culvert allowing McDonald Creek to flow below both the canal and the weir. 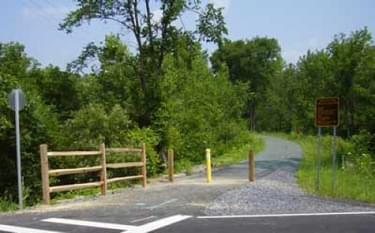 To make the most of natural assets, the Town undertook planning efforts soon after the turn of the century. These plans are now paying dividends, allowing the Town to obtain grants and to attract additional support to implement the plans. For example, Halfmoon’s Waterfront Revitalization Plan laid the groundwork to obtain NYS Department of State funding to construct a 3-acre park on the Hudson River. The waterfront park will include docking and river access for “car-top” boats, such as kayaks and canoes. Other amenities planned for the waterfront park include, a picnic pavilion, restrooms and parking. Future plans call for linking the waterfront park with the Champlain Canal Trail by means of a biking/walking trail. The Champlain Canal Trail is a mere ¼ mile from the waterfront park.

The Champlain Canal Trail is used by visitors to the area, and will increasingly do so as the Trail is improved and as interpretive features are added. The Trail appeals to a broad range of persons with differing interests. The Trail appeals to bird watchers because of its rural setting and the vibrant eco-system. The Trail attracts people with an interest in history because of the intact portions of the Historic Champlain Canal. And of course, the Trail is a prime destination for health conscious recreation users, many of whom use the trail daily for walking, running and biking. In the winter, the Champlain Trail draws cross country skiers and snowshoeing enthusiasts.