From York County Department of Parks and Recreation

Traversing York County to the Maryland border, this 19-mile multi-use trail provides an integral link in a statewide trails system and epitomizes the concept of a close-to-home trail experience, but has regional, State, and national significance as well. Heritage Rail Trail County Park, sharing the corridor of the former Northern Central Railway chartered in 1828, provides a link for visitors to some of York City’s oldest buildings and the creek where America’s first iron steamboat chugged.

The trail travels south 19 miles passing through eleven municipalities including the towns of Seven Valleys, Glen Rock, Railroad and New Freedom and adjoins directly with the Maryland Northern Central Railroad Trail (20 mile non-motorized rail trail). This trail, located in the center of York County, is the central spine of a planned greenway trail system to interconnect communities.

The trail is constructed adjacent to the railroad tracks (tracks remain in place and are usable) with a surface of crushed compacted stone. The cost to construct the trail totaled 3.7 million dollars. Funding partners included: federal, state, county and municipal dollars, individual and corporate donations as well as utility fees collected for use of the corridor. In 2006, visitation to the trail totaled 310,295. 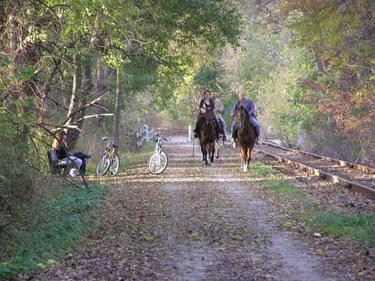 Trail amenities include twelve interpretive signs that explore natural and historic features such as: