The Sanctuary consists of 164 acres of maritime forest, marshes, and dunes, including a lake, a swamp, and a beach. It is located at the eastern end of Dauphin Island, a 14-mile long barrier island situated off the Alabama Gulf Coast. 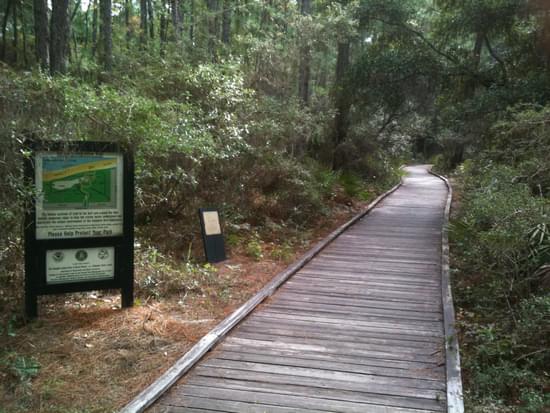 The Dauphin Island Bird Sanctuary has a number of trails but visitors enjoy the 1,000-foot accessible boardwalk from the parking lot to Gaillard Lake in which a finger pier has been constructed along with the beautiful lake where all types of waterfowl can be spotted. The trail system has been enlarged and a raised walkway through the Tupelo swamp has been created.

The extensive trail system includes boardwalks giving controlled access to the Gulf shoreline and both a swamp and dune observation platform. Trail managers have placed interpretive signage all along the three miles of looped trails. Two large nesting platforms were also installed in the dune area as part of Alabama's Osprey Nesting Trail.

Once on the beach, visitors can walk to historic Fort Gaines, where visitors can tour one of America's "Most Endangered Historical Sites" of 2011. The trails through the Dauphin Island Audubon Bird Sanctuary provide a safe non-motorized way to explore the Island's best treasures, all while exercising, relaxing, and enjoying the Alabama Gulf Coast.

Dauphin Island has been named one of the top four locations in North America for viewing spring migrations! The Sanctuary is of vital importance because it is the largest segment of protected forest on the Island and the first landfall for neo-tropical migrant birds after their long flight across the Gulf from Central and South America each spring.

Here these birds, often exhausted and weakened from severe weather during the long flight, find their first food and shelter. It is also their final stop before their return flight each fall. The Bird Sanctuary has allowed Dauphin Island to be recognized by the American Bird Conservancy as being "Globally Important" for bird migrations.

On August 5, 1864, the Confederate troops holding Fort Gaines rained down cannon fire Description on Union Admiral David Farragut's fleet those starting the Battle of Mobile Bay. This Battle is most known for Admiral Farragut coining the phrase “Damn the torpedoes— full speed ahead!” Most people know the Battle of Mobile Bay as a battle on the sea but it was also a battle on the shoreline of Dauphin Island, Alabama. Historians have records of the Fort's battle field stretching all the way to what is now known as the Dauphin Island Audubon Bird Sanctuary. 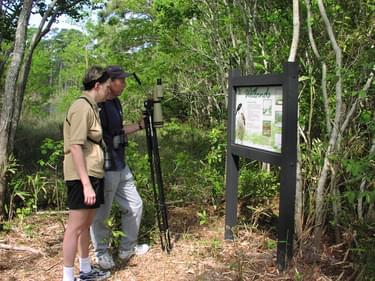 Once the Fort was decommissioned in 1926, the United States sold Fort Gaines to the City of Mobile. The City then gave the property to the Alabama Department of Conservation, which deeded it to the Dauphin Island Park and Beach Board.

During the development phase of the Dauphin Island Park and Beach Board, Dr. Wilson Gaillard, an avid birder and conservationist, recognized the need to create an Island refuge to protect the natural ecosystem as well as provide safety and resources for the incredible numbers of migrating birds and butterflies on their twice annual passages.

In 1967, the Park and Beach Board enhanced the status of the Sanctuary by entering into a formal agreement with the National Audubon Society, so that it was officially included as part of the national system of Audubon wildlife sanctuaries.

As the years passed, there was a growing awareness of Dauphin Island's unique location and resources related to the spring and fall bird migrations. Wild Bird Magazine selected Dauphin Island as one of the top four locations in North America for viewing spring migrations! An incredible 347 species have been reported on the island. 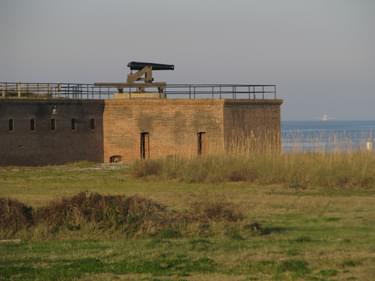 A view of historic Fort Gaines

Spring migration is the first landfall for many Neotropical birds that make the 600-mile flight across the Gulf of Mexico from the Yucatan Peninsula. Under adverse weather conditions, large flocks of exhausted birds of many species may seek shelter on the Island in a truly spectacular "fall-out." The Island has also been sited as one of the ten most globally important sites for bird migrations.

The future of this incredible site has never been brighter. It is one of the featured attractions of the Alabama Coastal Birding Trail and a separate project provides an extensive nature interpretive sign system along the paths.

Recently, the Bird Sanctuary caught fire and burned just over 60 acres of the Maritime Forest. With the fire freshly on our mind, the Park and Beach Board is in the process of engaging our partners to update the management plan which will include a Fire Mitigation Plan, action plan to control invasive species, and expand the outreach, education, and eco-tourism components to the Sanctuary. We also plan to expand the trail system to allow for enhance birding trails.