The trail traces the path of the Chattahoochee Valley Railway, which was constructed by the West Point Manufacturing Company to serve several cotton mills along the Chattahoochee River on the Alabama-Georgia border. 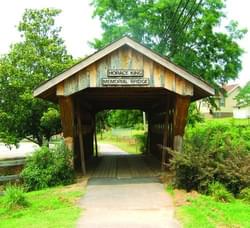 The standard gauge railroad opened in January of 1897, carrying passengers, cotton, cloth, and supplies between local towns and Riverdale Mills. Today, this trail ties together all the mill villages that compose the City of Valley and passes the majority of the 18 historic landmarks in the area.

At the eastern border of Alabama, amongst gentle hills and the mighty Chattahoochee River, are nestled Shawmut, Langdale, Fairfax and River View— all towns listed in the National Register of Historic Places. 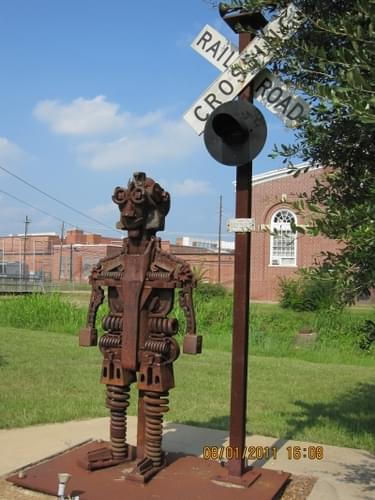 The mills that gave rise to these towns, which housed and sustained their mill workers, were built just after the Civil War. Nearly 120 years later, in 1980, the towns incorporated to become the City of Valley, now a growing community of nearly 10,000 residents.

The CVRR, as is it known to some, begins in the village of Shawmut with quiet spans of straight trail running through tall pines and a few homes set back from the trail. If you ride the trail's full 7.5 miles by the time you reach the terminus in River View you will have had a taste of the local color including shops, town centers, and historical bridges and mills. You may have also decided to take a brief side trip off the trail to catch a stunning view of the wide Chattahoochee River.

Many historic properties still exist along the trail and are described in a brochure available from the City of Valley. The Valley mill villages contain good collections of industrial architecture and vernacular mill house types typical of Southern company towns. The Fairfax Depot is one of two remaining CVRR Depots. Built in 1917, the building hosts a museum and rest area.

When the Chattahoochee Valley Railroad stopped running in 1992, Valley's mayor, Arnold Leak, then a council member, began exploring ways to reuse the railroad. "After several false starts," he says, "I became familiar with ISTEA grants. Working with the council and the public, I was able to gather enough support to acquire the rights-of-way and to apply for the grants to build the trail. To summarize... we built it!"

The hope is now to have Valley become a gateway to the Chattahoochee nature trails. And the area certainly has a rich historical base upon which to build. Recently when two Rails-to-Trails Conservancy staff members were visiting Valley to survey the trail for inclusion in an RTC guidebook, two young trail-users proudly revealed what may be their town's worst kept secret. One of them announced, pointing to the old steel rails peaking out of a culvert, "You know there's a railroad under there! The Iron Man sculpture, which local citizens call "Rusty," was welded by Chuck Moore from parts of cars and equipment that once traveled the Chattahoochee Valley Railroad. In 2012, with the help of a grant from the Alabama State Council on the Arts, Rusty was moved to the trail in front of the Historic Langdale Mill.

From Montgomery, AL: Take I-85N to exit 79 right onto Hwy 29/20th Ave; immediately get in right lane. Turn right onto 35th Street, then left onto 22nd Avenue. Parking for the Trailhead will be at the end of the road.