In the 1930s the Civilian Conservation Corps built a hanging walkway trail following the path of an old pipeline. 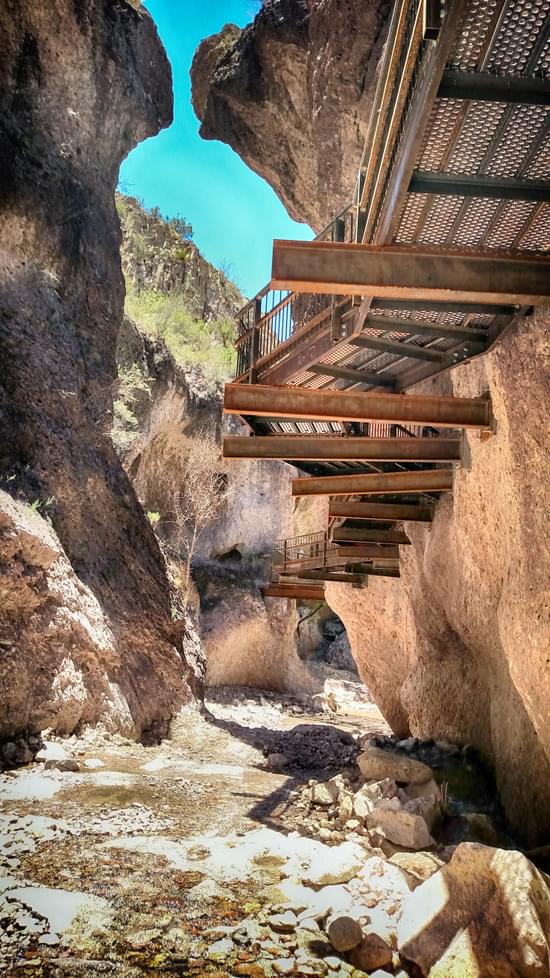 The hanging walkway follows the route of the old water line up the canyon; photo by Amber Wisley

The Catwalk Trail is located on the Glenwood Ranger District of the Gila National Forest. The Whitewater Picnic Area at the entrance to the trail is named for Whitewater Canyon, which played a pivotal role in the mining saga of the late 1800s and early 1990s. The town of Graham was located at the mouth of the canyon where a mill was built in 1893. The ruins of the mill still cling to the canyon walls overlooking the picnic area.

A water pipeline along Whitewater Canyon was also built in 1893 to provide water for the mill and town. It ran up the very narrow stretches of the canyon, sometimes as much as 20 feet above the canyon floor, and was considered to be an engineering feat in its time. The pipeline was in need of constant maintenance and the workmen who walked the line to repair damage dubbed it the "Catwalk."

In the 1930s the Civilian Conservation Corps (CCC) built a trail consisting of a hanging walkway following the path of the old pipeline. The Forest Service rebuilt the trail in 1961, and in 1978 it was designated a National Recreation Trail. The Catwalk Trail and picnic area has become the second most visited location on the Gila National Forest with more visitors coming every year. The trail also connects to the hundreds of miles of trails within the Gila Wilderness area. This is a Fee Demo site and a $3.00 fee is charged for parking. Over $20,000 a year is generated to help fund annual operations and maintenance expenses. 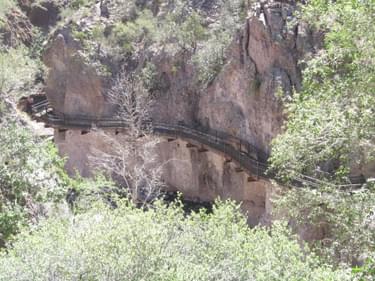 To improve safety and provide access to all ability levels, the Forest Service added approximately a thousand feet of accessible "universally designed" trail to the existing 1.15 miles. The new paved section now connects to the old trail and forms a short loop, half of which is accessible to wheelchairs and strollers. This was a yearlong $1.5 million construction project completed in December of 2003. Visitors will find new viewing platforms, a rock amphitheater, and easier access to the picnic area. The first half of the old catwalk has been replaced with a new metal walkway. The trail features pull-out points that allow the visitors to rest and enjoy the views.

A new interpretive plan is being developed and will result in new interpretive panels placed along the trail. The new panels will present information on the early cultures including the Apache Indians and local outlaws, as well as mining, flora and fauna, and the unique geology.