From the Washington Water Trails Association

This Puget Sound water trail is a network of 55 shoreline campsites for people traveling the Pacific Northwest inland sea in human or wind-powered, beachable watercraft. 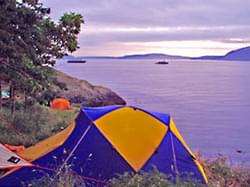 The Cascadia Marine Trail is the result of citizen involvement. In the late 1980's, members of the local sea kayaking community realized that a 5,000-year old tradition of traveling Puget Sound by small boat was threatened by increasing shoreline privatization and development. Paddlers looking for beaches to stop and rest or set up camp found few private landowners willing to share their shores. Concerned kayakers proposed a water trail throughout Puget Sound, allowing human- and wind-powered boaters to travel safely throughout the United States' second largest estuary.

In 1990, paddlers founded the non-profit organization Washington Water Trails Association and in 1993, along with Washington State Parks and Recreation Commission, formed a partnership with port districts and city, county, and regional parks to establish campsites along the 2,000+ miles of Puget Sound shoreline. The Cascadia Marine Trail will eventually provide a campsite every five to eight miles along the shore. Today, the trail is about 25 percent complete, and growing.

Puget Sound's Cascadia Marine Trail is a network of over 55 shoreline campsites for people traveling the Pacific Northwest inland sea in human or wind-powered, beachable watercraft. From the southern inlets to Hood Canal and the San Juan Islands, the Puget Sound offers some of the most exciting sea kayaking in the United States. In a small boat, you can harness the tides and currents to glide over shallow bays and kelp beds, explore rock gardens, and quietly observe wildlife— from auklets to orcas. Paddlers experience Puget Sound's maritime history while touring waterfronts, ports, and fish camps or exploring the old barracks and structures in parks such as Fort Worden or Fort Flagler.

The Seattle metropolitan area is home to over 3 million people, but a paddler launching from an urban park is only half a dozen nautical miles from a host of quiet, scenic campsites for an overnight or multi-night trip.

Ambitious explorers can launch their boats in the southern reaches of the Sound, near the state capitol Olympia, and paddle their way 140 miles north to British Columbia and up the Inside Passage to Alaska— the possibilities are endless.

A basic Cascadia Marine Trail campsite consists of a publicly accessible shore for landing boats, a level area for tents, and a toilet. Many campsites are primitive, without fresh water and are inaccessible by roads.

Other campsites are adjacent to developed campgrounds where showers, food, and a hot latte are a short walk away. Fees vary, according to which of many agencies manages the site, from none to payments per campsite, per boat or per person. 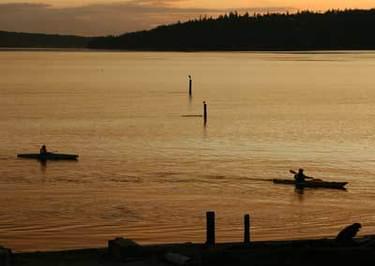 Each summer, a team of Sound Education and Action Kayakers travels the Trail educating the public about low-impact recreation skills and Leave No Trace ethics.

From its inception years ago as "the hidden path through Puget Sound" of Joel Rogers' book Watertrail, the trail has captured the imagination of kayakers, canoeists, sailors, and rowers plying Pacific Northwest waters in Washington state. This saltwater trail introduces modern explorers to historic and commercial coastal routes, in voyages of discovery along the shores of the native peoples' Salish Sea. Orca, salmon, bald eagle, heron, and puffin, side-by-side with trail users, feat on the bounty of lunar-pulled tidal currents and the rich contributions of mountain-fed rivers.