The westernmost rail trail in Florida, it extends from the historic town of Milton north to US Naval Air Station Whiting Field. The trail passes through pine woods, a cypress/bay swamp, and an area of white-topped pitcher plants. An unpaved equestrian trail parallels a segment of the paved trail. 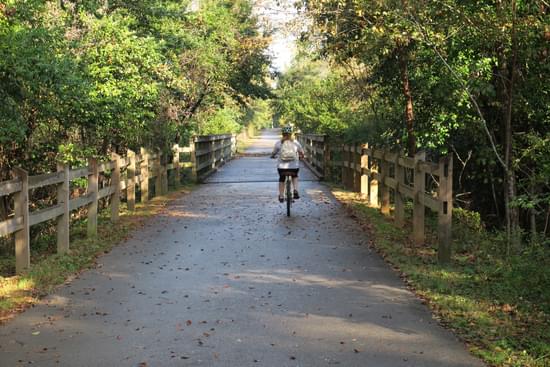 Managed by the Office of Greenways and Trails (OGT), the Blackwater Heritage State Trail is officially designated as part of the Florida’s Statewide System of Greenways and Trails. The Board of Trustees of the Internal Improvement Trust Fund (Trustees) obtained title to property in 1993. The corridor was acquired from the United States Department of the Interior at no cost to the Trustees through the National Park Service’s Lands to Parks Program. Two and a half acres adjacent to the Trail’s Visitor Center, developed as a community trailhead park with a small maintenance area was funded by the Office of Greenways and Trails Acquisition Program, a component of Florida Forever. The property is leased to OGT through January 30, 2044. Development for the paving of the trail was funded by the Florida Department of Transportation.

The Blackwater Heritage State Trail is the westernmost rail-trail in Florida, extending from the historic town of Milton north to Naval Air Station (NAS) Whiting Field. Whiting Field is the busiest Naval Air Station in the world, responsible for an estimated 46 percent of the Chief of Naval Air Command's total flight time and over 10 percent of Navy and Marine Corps total flight time. At its northern terminus, this 8.1 mile paved trail joins the 1.5-mile “Military Heritage Trail” which is managed by the U.S. Navy. Altogether, more than nine miles of paved trail offer an enjoyable trip through a quaint North Florida town and out into the countryside. Nine wooden bridges cross various streams and points along the way. The trail is mostly rural, but there are several street crossings.

The trail passes the old Milton Fire Station, Milton City Hall, and the trail’s Visitor Center. Further north, there are piney woods, a cypress/bay tree swamp, an area of white-topped pitcher plants and several creeks. Development for the paving of the trail was funded by the Florida Department of Transportation.

The Blackwater Heritage State Trail follows the path of the historic Florida and Alabama Railroad. Built in the early 1900’s, the original rail line transported lumber, passengers, and freight for the Bagdad Land and Lumber Company until the Bagdad mill was closed in 1939. In 1943 the federal government purchased the corridor beginning at its junction with the L&N Railroad to Roeville and extended the tracks 4 miles to NAS Whiting Field. The line was used during construction of the base and later used primarily for hauling aviation fuel. The rail corridor was decommissioned by the Navy in the 1970s. In 1993, the State of Florida received title, by donation, from the U.S. Department of the Interior, Federal Lands to Parks Program. This multi use trail was opened to the public in October of 1998.

There are five parking areas located along the trail corridor. The Southern Trailhead has limited parking, restrooms and a water fountain. Located just off of US90, one mile north, the Milton Trailhead features picnic tables and a gazebo, restrooms, a water fountain and a bicycle rack. A nearby shop sells rents and repairs bicycles.

The Visitor Center, located at 5533 Alabama Street, approximately one mile from the Milton Trailhead, offers parking, restrooms, picnic tables, barbeque grills, an amphitheater, a playground for children ages 2-12 and a meeting room which is available for hosting trail events or for rent by individuals. Blackwater Heritage Trail, Inc., the trail’s citizen support organization (CSO), operates a concession in the Visitor Center where snacks and souvenirs may be purchased. Quad cycles and adult tricycles are available for rent with prior arrangements.

The Equestrian Trailhead on CR191 (Munson Highway) has space for car and pick-up parking, horse trailers and oversized vehicles. There is potable water, water for horses and covered picnic benches. The equestrian trail runs parallel to the asphalt trail with shared bridges. The Military trail, however, does not accommodate equestrians.