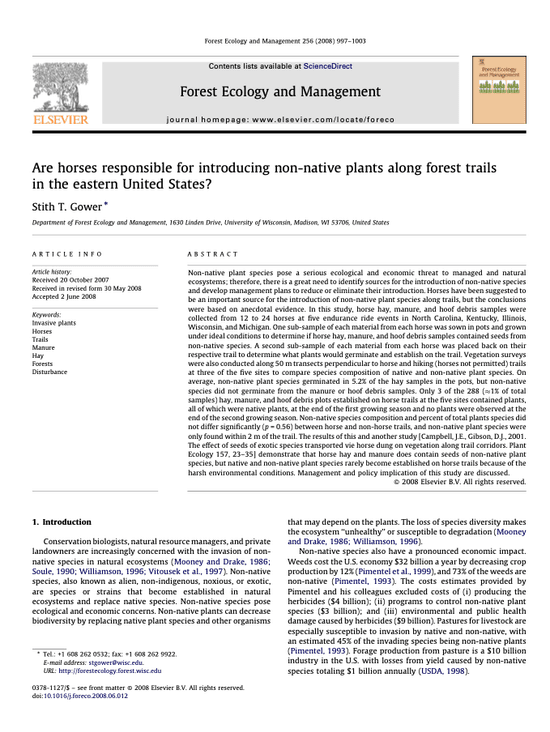 Non-native plant species pose a serious ecological and economic threat to managed and natural ecosystems; therefore, there is a great need to identify sources for the introduction of non-native species and develop management plans to reduce or eliminate their introduction. Horses have been suggested to be an important source for the introduction of non-native plant species along trails, but the conclusions were based on anecdotal evidence. In this study, horse hay, manure, and hoof debris samples were collected from 12 to 24 horses at five endurance ride events in North Carolina, Kentucky, Illinois, Wisconsin, and Michigan. One sub-sample of each material from each horse was sown in pots and grown under ideal conditions to determine if horse hay, manure, and hoof debris samples contained seeds from non-native species. A second sub-sample of each material from each horse was placed back on their respective trail to determine what plants would germinate and establish on the trail. Vegetation surveys were also conducted along 50 m transects perpendicular to horse and hiking (horses not permitted) trails at three of the five sites to compare species composition of native and non-native plant species. On average, non-native plant species germinated in 5.2% of the hay samples in the pots, but non-native species did not germinate from the manure or hoof debris samples. Only 3 of the 288 (1% of total samples) hay, manure, and hoof debris plots established on horse trails at the five sites contained plants, all of which were native plants, at the end of the first growing season and no plants were observed at the end of the second growing season. Non-native species composition and percent of total plants species did not differ significantly (p = 0.56) between horse and non-horse trails, and non-native plant species were only found within 2 m of the trail. The results of this and another study [Campbell, J.E., Gibson, D.J., 2001.

The effect of seeds of exotic species transported vie horse dung on vegetation along trail corridors. Plant Ecology 157, 23–35] demonstrate that horse hay and manure does contain seeds of non-native plant species, but native and non-native plant species rarely become established on horse trails because of the harsh environmental conditions. Management and policy implication of this study are discussed.