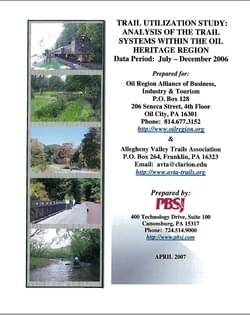 A trail utilization study was conducted in the Oil Heritage Region of Venango County and the southern portion of Crawford County in Pennsylvania from July 2006 to December of 2006. A network of trails over 60 miles in length that spans through Oil Creek State Park, Two Mile Run County Park, and traverses along the Allegheny River was the study area of the project. The following greenway trail systems were monitored in the study: the Allegheny River Trail, the Justus Trail, Two Mile Run County Park, the Sandy Creek Trail, the State Forest at Kennerdell, and Oil Creek State Park. The waterway trail system was also analyzed on a limited basis in the study (See Appendix A: Project Location Map).

Based on the trail counters that operated from July of 2006 to October of 2006, a total of 82,930 users were estimated to be visiting the trails in the Oil Heritage Region. According to the 261 surveys that were returned during the total study period, these trail users are predominantly from Pennsylvania (78%), especially the western portion of the state. Only 23% of in-state users are categorized as living within the Oil Heritage Region. Twenty-two percent (22%) of trail users travel from other states such as Ohio, New York, and Florida to visit the trails. Trail users most often access the trails with another person, and travel, on average, a distance of 33.25 miles to get to the trails. Trail users are mostly employed professionals or retired and tend to be middle­-aged, falling into the age cohort of 46 to 65 years old.

Seventy-five percent (75%) of surveyed trail users cited the trails as their main reason for coming to the area. They often enjoy an above average income. Trail users often visit the trails to go biking (74%) and walking (16.6%). Almost four percent (3.8%) of trail users back pack and jog the trails. Most trail users come to the trail system within the Oil Heritage Region to enjoy the scenery, watch wildlife, and go birding. The majority of trail users visit the trails a few times per year and stay on the trails for at least two hours, while they are there. Seventy-seven percent (77%) of the users are day-trip users who prefer to visit in the autumn and summer season. The users who do stay overnight, tend to stay for two nights and often stay in campgrounds. Trail users find the natural scenery, cleanliness, smooth trail surfaces, and maintenance of the trails to be the most important recreational aspects of the trail, while they hold cleanliness, connection to picnic areas, shade, and parking as the most highly regarded attributes of the trail system within the Oil Heritage Region.

Non-local trail users spent an average of $32.93 per person per day or $88.49 per group, while Oil Heritage users spent a daily average of $3.71 per person or $10.91 per group. Trail users spent the majority of their money on dining out and lodging. The 82,930 users who visited the trails between July and October created an economic benefit of $2.22 million within the Oil Heritage Region. It is estimated that approximately 160,792 users frequented the trail system within the Oil Heritage Region throughout the 2006 calendar year, creating an estimated overall