Nebraska's first official State Recreational Trail, The Cowboy Trail, extends west from milepost 83.3 west of Norfolk to Merriman is for use as rail-trail, while from Merriman to just east of Chadron (milepost 404.5) Nebraska Game and Parks Commission (NGOC) has interim use of a 30-foot easement from NEBkota Shortline.

This will be rail-with-trail where hikers and equestrians may share the easement with an active rail line. However, it will likely be the last part developed for use. Locals are encouraged to work on ideas or need for an equestrian trail. We count a total of 321 miles on the mileposts. But when they built the "new" bridge at Long Pine, shortening the distance by one mile, no one wanted to change all the signs to show the actual 320 mile total.

Safety decking and railing of the many bridges is going well, including completion of the two high bridges at Valentine and Long Pine. Deeds have been registered, and a thorough GIS map has been made of the 3,900-acre railbanked corridor.

There will be 221 bridges (or 16,120 feet) of wood-decked and railed trail bridges. The Valentine and the Long Pine high bridges overlook some of the state's most spectacular scenery. A student intern completed a computer listing of documents and details of the leases and easements as turned over to NGPC by the former Chicago & NorthWestern Railway Company. Income from such leases is to be dedicated to operation and maintenance needs.

Union Pacific took over the C&NW RR after the ICC railbanking process negotiations were completed. It also absorbed the contract obligations, including any environmental cleanup problems predating NGPC acquisition of the railbanked right-of-way. There were several such areas, and most cleanup has been completed. Installation of bollards, directional and safety signs is planned to comply with the federal American Association of State Highway and Transportation Officials standards. The railroad grade offers a gentle climb from elevation 1500 ft. MSL elevations out of Norfolk up to 3500 ft. MSL in the Pine Ridge area near of Chadron.

Noxious weed control is the responsibility of the savager until the company's work is complete. The contract requires that the right-of-way is to be left in a trail-ready condition. Then NGPC can open the trail for use, either in sections or from Norfolk through Valentine and on to Merriman. Demand is heavy now that the bridge decking and safety railing are nearly finished. The majority of the trail will be mountain biking only. This means that after the salvageable ballast is removed, the remaining hardpacked right-of-way will be reasonably bikeable. Some of the communities will have additional surface treatments, but the cost is definitely a limiting factor. Riders with narrow-tired bikes or packs will need to use the adjacent US 20 or 275 highway shoulders.

The Cowboy Trail Master Plan goes to press shortly. Guidelines for carrying the theme will be shared with the various communities. With the wide variety in cultural heritage and settlement patterns, the bikers and their sag-wagon crews will find much of interest all along the way. Several new matching grant programs are available to adjacent trail communities, including the Nebraska Statewide Arboretum landscaping project grants. Combined with federal ISTEA Enhancement grants, RTC community matching grants, federal Rural Development or CDBG grants, much can be accomplished . These efforts may not bring back the full impact of the former train service to the region, but they go a long way toward building a productive work base that will enable some families to stay in their chosen home towns. Their efforts and home town pride will certainly be appreciated by bicycling visitors who may be seeing these areas for the first time.

Recent legislation gives the agency an option to charge a trail user fee. Until the trail is open for use, a volunteer fee and tag are still under consideration. Maintenance funds will need to be secured. No opening date has yet been set because of the ongoing construction work. It will be late fall of 1997 at the very earliest for the whole bikeable 250 miles to be opened. The Valentine area could possibly be open from Merriman to east of the Valentine high bridge. The contract has been let for paving the ROW within Valentine's city limits and east to the bridge. The three miles east of the Valentine bridge (with the crushed rock test surfacing) could be opened somewhat earlier next year. 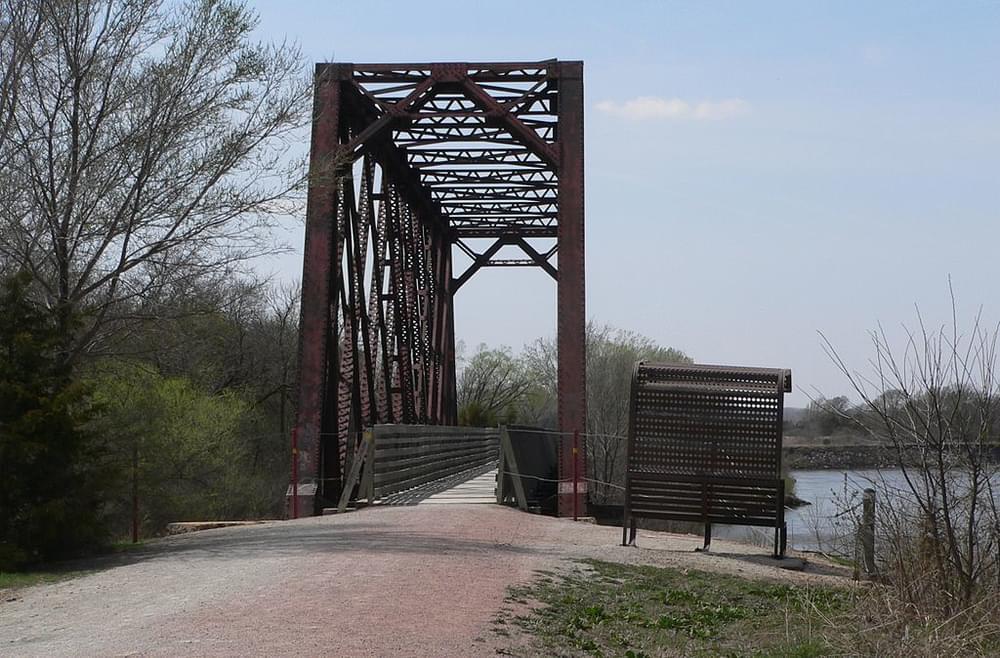 Because of the high demand from those who already know the prime canoeing available on the Niobrara National Scenic River and the views from the Valentine bridge, the public is excited over prospects, as are those calling in about the "Bicycling" article. However, the building season has closed down until spring for most trail work activities.

The ISTEA Enhancements project for renovation of the exterior of the historic O'Neill Depot has been completed. The contract for restoration of the interior of the depot has been awarded. Crews will go ahead with winter construction work. Trail surfacing through O'Neill has been approved in an ISTEA-NRTFA federal grant, as well as have those for Neligh and Long Pine. Construction should be underway as weather permits in the spring. Bridge decking and railing are nearly completed. Phase III surfacing projects continue as programmed, including Valentine.

Existing utility and hay leases will bring in small amounts of cash for O & M as the Cowboy Trail opens in 1997. Some adjacent landowners are requesting additional or continuing hay lease agreements or crossings, all of which are being negotiated through NGPC's Realty Division, under conditions of the Master Contract.

Interest is building in all the communities, large and small, to showcase town attractions and special festivals. They all hope to realize some of the benefits of the expected economic and rural development potential as the Cowboy Trail opens. They are proud of their communities. They are anxious for all potential visitors to see their various attractions. Their bike shops, restaurants and Bed and Breakfasts are looking for additional business. Potential "See Nebraska Tours" could include the Cowboy Trail if there is interest. We hope some of the Cowboy Trail information will assist you in making whatever vacation arrangements you prefer. Just plan to come and share our scenery and hidden treasures.

Whereas, the original stated purpose of the NGPC's new Strategic Planning Process was to attract new stakeholders to support the expanded expectations of the public, it begins to appear that we have found them in the trail users. Various local groups are volunteering to assist where they can, adopting a trail, supporting a local trail group, scheduling events. One example is the upcoming Second Annual Nebraska Trails Conference (May 1997) to be held in Valentine.

New Bed and Breakfast facilities are coming on line in several places along the route. New events calendars and regional tourist brochures will be coming out in the spring 1997 listings in the local newspapers. Nebraska's Department of Roads has published a map showing "Suggested Bicycle Route Guide Map-Highways and Roads" which is included in this mailing. You can see how the highways parallel the Cowboy Trail.

As our new trail facility comes closer to opening, the potential for increased public support is becoming readily apparent. The modest operations and maintenance budget for the coming biennium may need to be increased as the trail opens. Gifts and bequests will certainly be encouraged. Several NGPC brochures expand upon some of the offerings available to potential Cowboy Trail users.

Update: The Cowboy Trail was designated as a National Recreation Trail in 2001.