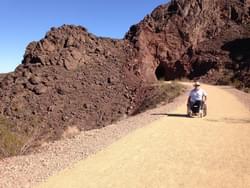 The Historic Railroad Trail in Lake Mead National Recreation Area once moved equipment and workers from Boulder City, Nevada to the dam construction site. Five tunnels were constructed to accommodate the oversized equipment that was used to construct Hoover Dam.

Converted to a multiuse pathway, and designated as a National Recreation Trail in 2015, it is a popluar trail for visitors to Hoover Dam. In this desert environment, trails, especially high-use trails like these are subject to a lot of use as well as abuse from the daunting desert environment.

The improvements will result in reduced maintenance costs and extend the overall life of the trails. The Historic Railroad Trail was graded and received a new layer of decomposed granite and upgraded drainage that will improve the visitor experience.

Accessibility of the trail was also improved by adding compacted surfacing and extending the surface material to cover the rest areas. Ed Price from the Accessible Trails Foundation was impressed with the improvements. “I did the 2.1 miles from the trailhead to the Bureau of Reclamation boundary and back in my wheelchair. This trail was previously off limits to me. I liked the firmness and its natural, esthetically pleasing appearance. It is beautiful,” he said. 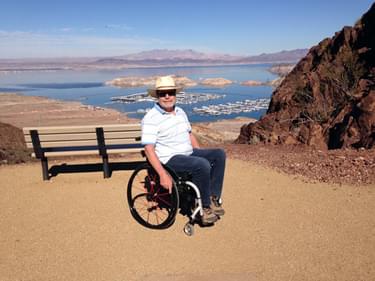 Ed pPice at the Lake Mead Overlook, where the rest stop surfacing was also improved

“I was especially pleased with the consistent evenness through the tunnels which gave me confidence while safely rolling through the nearly dark places,” he added. “In the spirit of universal design, the trail will be more comfortable for hikers and families because there are no protruding rock tripping hazards or loose coarse gravel.”

“The Historic Railroad Trail was designated as a National Recreation Trail a few years ago, and it needed to be made more accessible,” said Carl Bush, Lake Mead civil engineer and project manager.

“The existing trail surface was loose, and there was old railroad ballast debris from when the tracks were removed. We realized that strollers and wheelchairs struggled with the surface, and there were drainage issues.”

“The Historic Railroad Trail was designated as a National Recreation Trail a few years ago, and it needed to be made more accessible,” said Carl Bush, Lake Mead civil engineer and project manager. “The existing trail surface was loose, and there was old railroad ballast debris from when the tracks were removed. We realized that strollers and wheelchairs struggled with the surface, and there were drainage issues.” 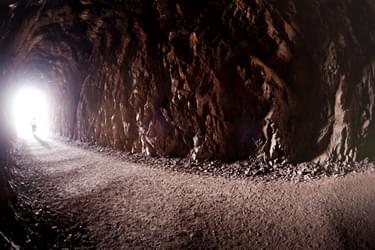 Detail of the crushed rock surface inside one of the five tunnels along the trail. Photo by Andrew Cattoir for the National Park Service, Lake Mead National Recreation Area

Ten of the 17 miles of trail were repaired, resurfaced, or replaced. Over 4,000 square feet of asphalt were poured and 10,000 feet of cracks were sealed, according to Bush. The entire 17 miles within the park also received a slurry seal coat to help protect the surface from the damage of harsh summer temperatures that can crack the asphalt. 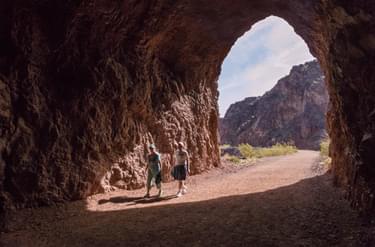 “The River Mountains Loop Trail provides people from all walks of life an opportunity to experience the vast beauty of the Lake Mead National Recreation Area, the River Mountains, and the Las Vegas Valley. We are constantly receiving compliments on the trail and how lucky we are to have such a great resource right in our own backyards.”

Lake Mead’s maintenance and engineering crew in partnership with the Bureau of Reclamation and a grant from the Southern Nevada Public Lands Management Act made the project possible.

In recent years, Lake Mead National Recreation Area has undergone many additional improvements to parking areas, campgrounds and restrooms to make the park more accessible. The park has also created virtual experiences of park areas that are not physically accessible, such as the cultural museum and the remote ghost town of St. Thomas.

In an effort to make the park even more accessible, the park is undergoing an Accessibility Self-Evaluation and Transition Planning process. This will involve evaluation of the park’s public areas to document barriers that impede accessibility, identify solutions that will improve conditions, and determine implementation strategies.