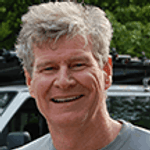 Tom Sexton has been the Director of the 10-state Northeast Regional Office of the Rails-to-Trails Conservancy since 1991, the same year he founded the Environmental Fund for Pennsylvania. In the early 90s, he was the lead Pennsylvania advocate for Transportation Enhancements (now TAP) and he led the effort to protect unused rail bridges and tunnels, which resulted in an 18-month demolition moratorium. Tom led the most comprehensive study of rail-trail maintenance practices from over 200 trail managers in 2015. He was Co-chair of the 1999 International Trails and Greenways Conference.