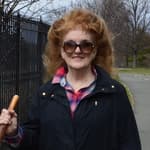 Marianne Wesley Fowler is the Sr. Strategist for Policy Advocacy for Rails-to-Trails Conservancy (RTC). Based in Washington, D.C., she has led RTC through five reauthorizations of the federal transportation bill. Ms. Fowler has nurtured the growth of the trails movement, for both recreational and transportation purposes, for over 25 years. She led the RTC team tasked with providing coordination and communication services to the Nonmotorized Transportation Pilot Program.

Marianne has presented at numerous conferences over the years, including the 2015 International Trails Symposium, speaking then about the role of Federal agencies and Congress in trail funding. She co-authored Trails and Trailways for the 21st Century and collaborated with faculty at the Harvard School of Public Health in researching and writing Factors Associated with Federal Transportation Funding for Local Pedestrian and Bicycle Programming and Facilities.

Ms. Fowler is also the 2nd Vice-Chair of the American Trails Board, co-chairs the Coalition for Recreational Trails, and is immediate past Vice President of America Bikes. Before joining RTC in 1988, she served as the Political Director for the National Women’s Political Caucus. She is a native daughter of Tennessee.