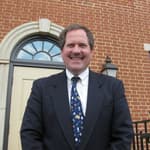 Daniel M. Rice is the President and Chief Executive Officer of the Ohio & Erie Canalway Coalition, headquartered in Akron, Ohio. The Ohio & Erie Canalway Coalition (OECC) is the regional non-profit organization working for the conservation, development and interpretation of the natural, historical and recreational resources along the Ohio & Erie National Heritage Canalway from Cleveland to New Philadelphia, Ohio. Since 1994, Mr. Rice has worked with over 150 community partnerships and raised over $75 million in development funds for the preservation of historic structures, the development of the 101-mile multi-use Ohio & Erie Canal Towpath Trail and the conservation of natural resources along the Ohio & Erie National Heritage Canalway. Mr. Rice is a native of Ohio, with a B.A. in history from the College of Wooster and M.A. in American History from the University of Akron. Mr. Rice is married to Nancy Neagoy Rice and lives in Cuyahoga Falls, Ohio with their daughter Rachael.