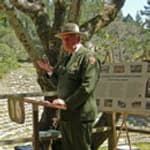 Brian O'Neill, who died in 2009, was the longtime superintendent of the Golden Gate National Recreation Area who helped transform the Presidio and other military bases into parkland. Mr. O'Neill, who was put in charge of the 75,500-acre recreation area in 1986, was one of the longest tenured superintendents in the National Park Service and perhaps the most influential. He managed a $25 million operating budget, 347 park service employees, and 20,000 volunteers, the largest number of volunteer workers of any park in the world.

-- From the San Francisco Chronicle