President with League of American Bicyclists 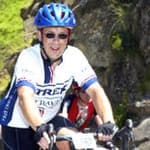 Andy Clarke, with more than 25 years of experience in cycling advocacy, is currently the president of the League of American Bicyclists. His past experience includes stints at Rails to Trails Conservancy, the Association of Pedestrian and Bicycle Professionals, the Bicycle Federation of America (now the National Center for Bicycling and Walking), and as a consultant to the Federal Highway Administration. Clarke is a 1984 graduate of the University of Birmingham, United Kingdom with an undergraduate degree in law. He is a founding member of America Bikes and the Association of Pedestrian and Bicycling Professionals. Clarke’s passion for cycling started when he was growing up in England, and has stayed with him through hundreds of thousands of miles of cycling on four continents. He is recognized as a policy expert on almost every aspect of bicycling, and still enjoys a tough climb on his Trek touring bike better than anything else. Clarke lives in Fairfax, Va. with his wife, Kristin, and two children Ashton and Jacqueline.