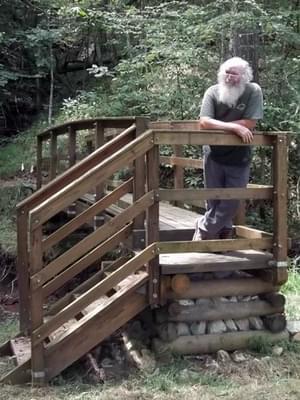 The trail that he, along with others, built as a boy, celebrated its 50th anniversary in October of 2012. There are not many citizen based, volunteer efforts that survive even a few years, let alone fifty. Charlie was also involved in the early construction of the Allegheny Trail and has been involved in providing support to other trail efforts throughout West Virginia. He has volunteered his time and donated services and equipment from his company in support of numerous projects.

His life interest in trail building, as a volunteer, led to the creation of his business. The company, Tri-State Company, has been building trail, professionally since 1989. Tri-State Company was started as a non-related business activity of Tri-State Area Council, Inc., Boy Scouts of America, in 1987. The mission of the company was to create job opportunities for youth in the Huntington area.

The Kanawha Trace already had a volunteer trail crew and equipment which formed the nucleus for the fledgling business. The first trail they constructed was for the West Virginia Department of Culture and History, connecting Camp Washington Carver with Babcock State Park, the Manns Creek Gorge Trail.

After two years, the trail company was incorporated separately as Tri-State Company, Inc. Tri-State Company's market niche is remote site construction, often employing helicopter support. In the course of 25 years, they have built, designed, reconstructed, or maintained over 500 miles of trail. They are, perhaps, better known as the "bridge people", having built numerous bridges to include: cable suspension, glue-lam, steel, heavy timber, and their specialty, unique curvilinear screw laminated bridges/elevated walkways.

Charlie views his company as more than a trail building company; he sees it as engaged in the art of "recreational infrastructure." Charlie continues to volunteer his time and donate his services to the trail community of West Virginia. He also serves as a Board member of the Professional Trail Builders Association.