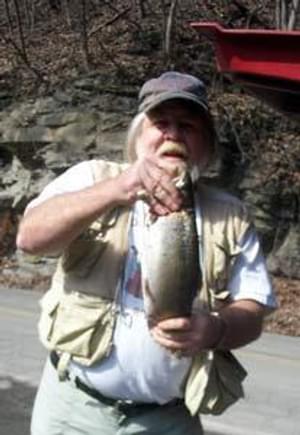 When Bill Queen learned no agency in West Virginia had the authority to designate a stream as a water trail, he got the WV Division of Natural Resources to give them a letter acknowledging the Walhonde Water Trail existed.

After four years of hard work and thousands of hours of volunteer time, southern West Virginia has a sanctioned Water Recreation Trail. Partly because of these difficulties, the WV Recreational Trail Advisory Board is addressing this issue and may adopt criteria for designating water trails soon.

Under Bill Queen’s leadership, signs were installed directing visitors to the public access points that already exist along the rivers and pointing out the historic locks and dams that were used until shortly before the Civil War to bring coal and timber out of the Coal River watershed. To publicize the water trail the Group developed a trail map and brochure (see copy enclosed) and has created an annual “Tour de Coal” float trip down the lower eleven miles of the Coal River. Bill’s legacy doesn’t end there. The group is continuing his long-term plans to compliment the water-based trail system with a “Scenic Backways” system on roads that parallel the Big, Little and Lower Coal Rivers. The concept of a water and Highway based trail system according to Queen "...will provide the three county region with a unified recreational based plan based on the Coal Rivers." He noted, "The growing tourism business coupled with the large (500,000) local population base makes the Coal River a natural resource that can help grow the regions economy."