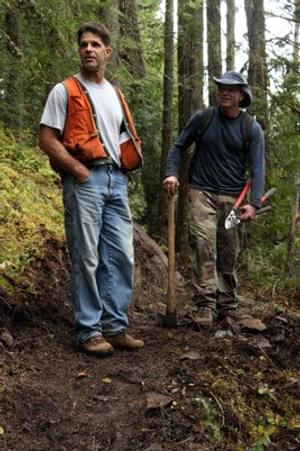 Bob Pacific began his career with the US Forest Service, on the Bly Ranger District of the Fremont National Forest.

He worked in a variety of positions including Timber and Silviculture until transferring to the Mt. Baker-Snoqualmie National Forest in the early 1980’s. In 1995 he found his niche as the Snoqualmie Ranger Districts’ Trail and Off Road Vehicle Coordinator and the Permit Administrator for the Snoqualmie Pass Ski Areas.

The Snoqualmie District offers a complex system of trails serves a broad population base and poses unique maintenance and operations challenges. As the Trails Coordinator, Bob has worked tirelessly to meet these challenges. He is an explosive handler, a “C” faller and Driver License Examiner. In addition he serves on an All Incident Overhead Team.

The Snoqualmie District is the most easily accessible portion of the Forest to the Seattle Metro area. Over 3 million people are within an hour’s drive of the District and the trails are heavily used and deeply loved. Bob has been responsible for the maintenance and operation of over 180 miles of multi-use trails and an Off Road Vehicle Campground with 40 miles of trails that are accessible to 4x4’s and motorcycles. Trail maintenance issues are complicated by unforgiving geography, a late melting snowpack and intense winter storms. Being downstream from Mt. Rainier’s large glaciers only compounds these issues! It almost goes without saying that trail maintenance and construction on the west slope of the Cascade Mountains is very labor intensive and expensive.

During the fall and winter of 2010-2011, severe windstorms impacted many miles of trails while recovery from record flooding in 2006 was still underway. Many areas appeared devastated with huge, old growth trees precariously “jack-strawed” and suspended above the trails. Sections of the Skookum Flats National Recreation Trail were buried in downed logs, a picnic shelter at Evans Creek ORV area was destroyed, and trail bridges were washed out or destroyed. Skilled sawyers and blasters were going to be necessary to clear some of the damage. During this same time, multiple projects associated with the Evans Creek Campgrounds’ Master Development plan were also scheduled to be implemented. 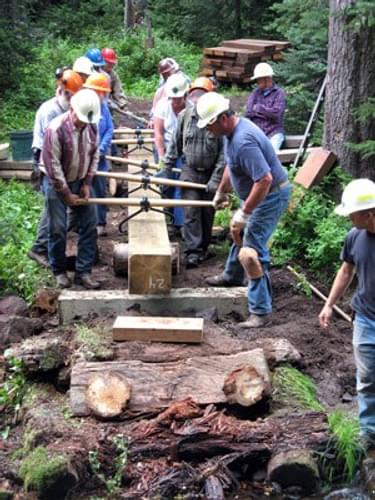 Bob rallied to the cause and coordinated the efforts of partners and volunteers from many different organizations including several chapters of the Back Country Horsemen of Washington, Washington Trails Association, Evergreen Mountain Bike Alliance, Northwest Youth Corp, Pacific Northwest Four Wheel Drive Association, Pacific Crest Trail Association, Pacific Northwest Trail Association, AmeriCorps, Forest Fire Lookout Association and hundreds of individual volunteers. During the last two years Bob has coordinated over 15,000 volunteer hours of trail work; a public benefit worth in excess of $300,000. This effort involved hands on training, including chainsaw certification, and providing all the logistics and support necessary for trail work parties.

In addition Bob successfully sought and was awarded grants of about $250,000 from the Washington State Recreation and Conservation Office. These grants enabled him to assemble a trail crew to help with the maintenance challenge. By the close of the 2012 field season the District trail system had been cleared, many structures such as crib walls, turnpikes and bridges were constructed and the shelter had been replaced. The Evans Creek Master Development projects were underway and nearing completion.

It was a daunting and challenging couple of years, but that was not all. During this same time, Bob was faced with a serious, potentially life threatening, challenge of his own. A bout of pneumonia left him hospitalized during the late fall of 2011. This was followed by the discovery of a brain tumor that required major surgery. This knocked him down, but not for long. He returned to work with the same dedication and determination that he is known for and continues to strive for the success of the trail program.