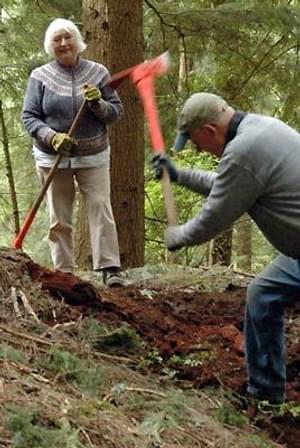 In the early 1990s, Joan Melcher retired as a High School Chemistry teacher from the Issaquah Washington School District.

Joan and her husband Duane moved back to the family farm in Mt. Vernon, WA. Joan was an avid hiker and one day while she was hiking on Blanchard Mountain she happened to come across Ron Strickland, the founder of the Pacific Northwest Trail.

Ron started telling Joan about the Trail, his vision for the Trail, and also his frustrations in not being able to secure National Status for the Pacific Northwest Trail. Joan got very excited about the whole Trail concept, got some of her friends together and started doing maintenance work parties on the Trail. About a year after Joan got involved, she convinced her husband to get involved also. They didn’t have the tools required to do proper trail maintenance so Ron helped them write an RTP Grant to purchase tools.

In 1996 the Melchers took over the Pacific Northwest Trail Association from Ron, formed the Skagit Trail Maintenance Organization, and got really serious about the PNT through Skagit and Whatcom Counties. Duane became President of the Board while Joan took on the task of Secretary/Treasurer. In 2003 Joan took the reigns as President of the Board.

Monthly hikes were started on different segments of the Trail, while the first and third Saturdays of each month, beginning in April and running through October, were reserved for work parties on the Trail. Duane led the hikes, but Joan took command of the work parties. As the Skagit group, under Joan’s tutelage, grew in number and they became more proficient in trail construction and maintenance, they expanded to more and more sections of the Trail within their domain.

Because of Joan’s diligence and determination the route of the Pacific Northwest Trail through Skagit and Whatcom counties became a dream for hikers. Today the PNTA sees more than 25,000 hikers per year on these segments. The PNTA was asked in 2003 to do maintenance of the PNT through Deception Pass State Park, on Whidbey Island, and who led the charge, Joan Melcher. Today the PNTA has an Adopt-A Trail agreement with the park to not only maintain the PNT, but all of the trail system through the park. The Skagit group today maintains approximately 85 miles of the Pacific Northwest National Scenic Trail, much to the joy of the myriad of hikers using those segments.

Joan continues to be the driving force behind the Skagit Trail Maintenance Organization and at the same time has taken over weekly hikes for a joint group of PNTA and Audubon members. This group hikes year round with different hikes each week. The hikes started out with minuscule numbers; but have grown to the point where upwards of 50 people could show up. This has created a situation where if hikes are planned for the National Park or wilderness areas that the group has to break into smaller groups and go to different areas to hike. This causes Joan no discomfort; she takes it in stride even if plans have to be changed on the fly.