This award recognizes quality, well-designed multi-use trails systems that are integrated into private developments to encourage active lifestyles, reduce reliance on automobiles, connect the development to other public and private pathways and destinations, and preserve and promote natural areas. 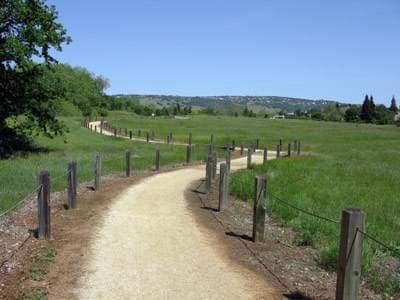 The Parkway is a master-planned community located in Folsom, CA.

The Parkway encompasses a total of 612.1 acres, which includes 2100 single and multi-family residential dwellings, commercial and retail development (18.2 acres), and park and open space uses (242.4 acres). The overall project layout has been designed with an environmental emphasis.

More than one third of The Parkway’s residential planning area is preserved as a natural habitat, including 208.1 acres in the Humbug-Willow Creek Parkway. The plan for the natural parkway included recreating an existing riparian stream corridor thru the site, linking existing forests, wetlands, and ponds together. It is part of the City of Folsom’s Humbug-Willow Creek Parkway which is planned to be 64 miles, of which 45 is currently built.

The Parkway’s five miles of trails run the entire length of this environmental corridor. These paved and decomposed granite trails are used regularly for all types of recreational activity including walking, jogging, biking, and bird watching. Rest areas along the trails offer seating and viewing areas and picnic tables as well as interpretive displays explaining the creek system’s various habitats. There are two typical trail sections in the project. The primary section is a ten foot wide asphalt section with two feet of decomposed granite on both sides. The second section is a four foot wide decomposed granite trail. 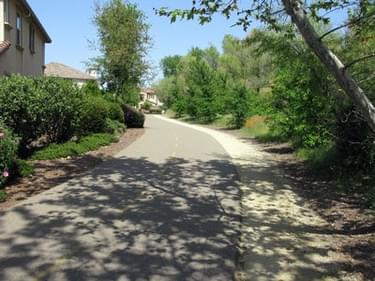 Trail through neighborhoods at The Parkway

The completion of the five miles of trails within the Parkway development was the first phase of trail development along the planned 16-mile Humbug-Willow Creek Corridor and has had a positive impact by enhancing the environment for cyclists and walkers. Within these five miles of trails there is direct access for cyclists and pedestrians to six mini-parks, three large community parks, an elementary school and at the north end of the project, a new 100,000 sq. foot retail center that includes a grocery store, banks, many restaurants and numerous specialty stores. This center has become a major destination for cyclists with three dedicated access points to the center from the trail.

These destinations are just within the trails in the Parkway development, however, when you combine these with the complete 16-mile Humbug-Willow Creek corridor the trail now provides access to an additional three schools, retail centers, four large employment centers, four additional parks and four other popular trails including: State Parks Lake Natoma Trail, Oak Parkway Trail, Folsom Parkway Rail Trail, and the planned Johnny Cash Trail. The residents in the Parkway development are very fortunate to have such a wonderful trail system in their backyard with access to so many popular destinations, which was always the goal when the development was planned.

To help guide the trail user, the City of Folsom, in close coordination with Parker Development, created a city-wide bike map the identified all Class 1, 2, and 3 bikeways throughout the city. A separate guide map was also created specifically for the 16-mile Humbug-Willow Creek corridor that identifies native plant and animal species that the trail user could expect to see along the trail. A large kiosk was also placed at the junction of two of the trails and adjacent to the Oak Chan Elementary School, which provides opportunity for the community to post upcoming events. 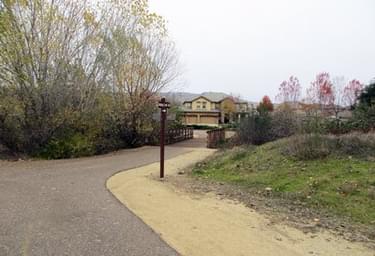 One of the big features along the trail are the 14 observation and interpretive sites located along the five mile trail system. There are two significant elements along the trail which include the surface gold mining activity that took place along Humbug and Willow Creeks. In the early 1900’s, the Natomas Company began surface mining operations along Humbug-Willow Creek and continued it into the 1930’s. There are a few sections of trail that still have remnants of the mining activities preserved and can be seen directly from the trail.

The second significant feature along this section is a direct result of the efforts of Parker Development, who were able to bring back the natural parkway that was present prior to the early mining activities, which included recreating an existing riparian stream corridor thru the site, linking existing forests, wetlands and ponds together. In developing the Humbug-Willow Creek Parkway, experts in the environmental planning and habitat management field in coordination with the U.S. Fish and Wild Service and Army Corps of Engineers, created ponds, recreated creek beds, replanted native vegetation and enhanced wetlands, woodlands, and riparian habitat in effort to preserve hundreds of native animals and plant species. These are among the elements identified in the many interpretive signs along the trail.