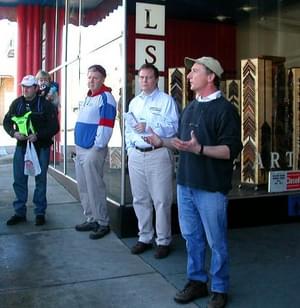 Dan grew up in the mountains of Northeast Tennessee hiking and camping in wonderful forested areas.

As an Eagle Scout he learned early on the value of trails as resources that needed to be accessible, well maintained, and safe. Living close to the Appalachian Trail he met day and through hikers and listened to their stories of adventures in the wilderness, appreciation of natural beauty, and the need for good trail connections throughout the region.

Through the years Dan became a strong public advocate for trails networking with hiking and biking clubs, seniors, nature lovers, transportation planners, community developers, and others involved in trail work across the region. Speaking before civic clubs, city and county officials, state leaders, trail user groups, and developing strong relationships with the many media outlets Dan involved many in the conversation around the value of support for safe paths to schools, work, recreation, and wilderness preservation. He has involved elected officials on the local, state, and federal level in the dialogue for continued planning and funding for greenways and trails for all user groups.

Dan currently is employed as a project manager in economic and community development for Washington County, Johnson City, and Jonesborough, TN. Part of his job responsibilities is to engage local communities in policies that promote Smart Growth and Livable Communities as a vital part of economic development. He communicates to the general public, government agencies, community organizations, civic and trail clubs and area businesses about the valuable return on private and civic investment in multi-use trails, bike lanes, greenways and parks that provide accessible recreational opportunities, and natural areas.

Serving since July, 2007, on the Tennessee Department of Environment and Conservation (TDEC), Commissioner's Council on Greenways and Trails, he has promoted his vision of an interconnected trail network that would link communities across the state. 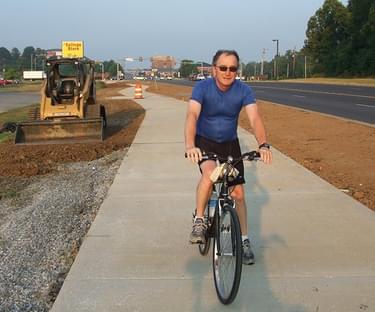 He works closely as a volunteer/volunteer leader with the trail projects listed below and with trail user groups across the region and in other states including the following:

Dan was also recently (March-June, 2012) a stakeholder in the statewide Tennessee Department of Transportation study, "Removing Barriers for Smarter Transportation Decisions" and attended several meetings in Nashville during the course of the study.

He is also active in the statewide bicycle and pedestrian organization, Bike/Walk Tennessee and attends meetings and participates in conference calls held in support of these initiatives. With a nickname of "Dan The Trail Guy" Dan is easily one of the strongest advocates for greenways and trails in the state of Tennessee.