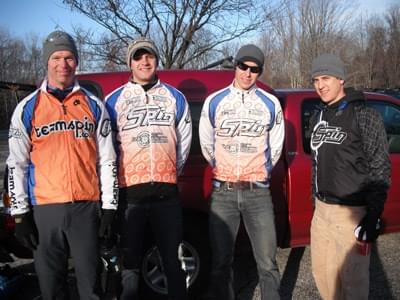 Cleveland Metroparks is an independent government entity providing over 22,000 acres of open space around greater Cleveland, mostly in Cuyahoga County.

We provide a variety of outdoor recreation opportunities, but until now had only two miles of mountain bike trail.

One out of four adults and children in Ohio are obese and Cleveland Metroparks wants to increase active recreation in our community.But there was opposition to mountain biking. Mountain bike groups tried for many years to get access to trails in Cleveland Metroparks, a metropolitan area of approximately 3 million people. Local Spin Bike Shop owner, Greg Jackson, was part of this effort. Back in 2010 he rallied local cyclists to show up and be heard at public input meetings to encourage the Park District in this direction. He willingly volunteered to ride winter miles in the cold and rain with me when I asked him to show me potential mountain bike areas via our mountain bikes.

Today, through the dedicated efforts of Greg and others, Cleveland Metroparks staff and volunteers are nearly finished constructing a 9+ mile, sustainable, single-track, mountain bike trail. The trail is beginner-friendly, attracting new riders and accommodating experienced riders, all of whom can ride to the trail head via a collected 23-mile paved path. It was built by hand in only 9 months.

As one of tile leaders on this project, I reached out to the user group for advice and participation. Greg made himself available for support and technical advice during the contentious planning stages of this project. Other park user groups and some employees were strongly opposed to mountain biking. Cleveland Metroparks Board meetings were tinged with this hostility. Greg came to a Board meeting and rallied others to attend and speak out as well. 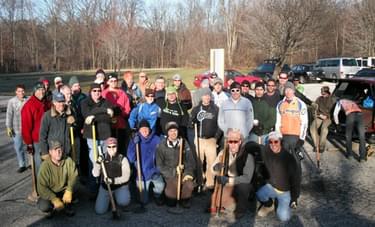 As a small business owner, he addressed the Board of Directors about the economic benefits of trails and he brought other supporters to speak on health and wellness and the role mountain bike trails can play in the importance of attracting young professionals to the region.

As a mountain biker with a long and accomplished history, Greg was able to provide us feedback and advice on the trail design. As the owner of a bike shop, he could also offer us the perspectives of a variety of user needs having sold thousands of mountain bikes to beginners and experts alike. Some weeks I talked with him so often I thought I should be paying him a consulting fee!

When it came time to build the trail, we called upon volunteers from the Cleveland Area Mountain Bike Club (CAMBRA), of which Greg is a supporter. Greg also rallied his employees and members of the shop-supported club and team to volunteer and build trails. They showed up in numbers big and small throughout the months of building.

When the grand opening came, Greg brought his children out to help take the "inaugural ride" providing the photo opportunity at the media event. For the public opening, he spent the whole day giving workshops on "How to Change a Tire" "Fit a Helmet" and other bike related topics. He also recruited two other volunteers; one to help with the workshops and one to DJ the event for free.

The Park District invested $50,000 in this trail and realized that passionate trail supporters needed a way to donate directly to trail projects. Greg offered to make a financial donation from Spin Bike Shop to help us establish the 'Trails Fund" which has now grown into an entire fund raising, volunteer recruitment and educational campaign around trails for all user groups. Greg offered us the opportunity to co-apply with Spin Bike Shop for a grant from Specialized Bikes. The grant goes to agencies that work closely with bike shop owners in cycling advocacy. Cleveland Metroparks and Greg Jackson were a great team and Specialized thought so too. They awarded Cleveland Metroparks $5000 towards the mountain bike trail project due to Greg's work with us.

Going forward, Greg has already volunteered to have Spin Bike Shop organize and run a cyclocross race in our parks in 2013. All proceeds will go to the Trails Fund. Cyclocross races require many hours and many volunteers, so this is a significant commitment of resources and personnel.

Greg Jackson leveraged his position as a successful business owner and his relationship with Cleveland Metroparks to help our trails community. He put in hours of work throughout the mountain bike project, willingly taking my many phone calls (1), donating money or time as needed. He continues to think ahead and looks for opportunities to work with us on his passion, trails. Greg deserves this award because selling bikes is not his only goal in working with us. He truly wants to improve the community by promoting active lifestyles and a connection to the outdoors.

Greg's ongoing commitment to Cleveland Metroparks trails, his ability to raise money and volunteers and his deep knowledge of bike trails and cyclists make him a unique Trail Worker who had a big hand in our success with mountain bike trails so far. We look forward to ongoing work with him.