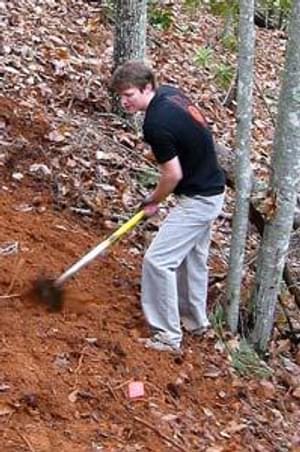 In addition, Mr. Horton worked with Eagle Scouts to complete four bridges on the Overmountain Victory Trail at W. Kerr Scott Lake. Under Mr. Horton’s Leadership, the BMCC worked in excess of 7,000 work hours in carrying out projects including trail construction, trail maintenance, storm downed tree removal. In addition he has assisting the Corps of Engineers in recruiting and developing partnerships which have greatly increased the ability of the Corps to manage and develop its trail systems.

Mr. Horton has worked closely with the Corps of Engineers in writing successful grants which have provided funding support funds for these trails. Mr. Horton work has led directly to gaining recognition of segments of the W. Kerr Scott trail systems as National Trails System. His planning skills have also led to many successful public events such as bike safety events for children and several annual mountain bike races which draw in participants from all over the United States. Thus his work has added greatly to the destination mountain biking and hiking and the growth of the region’s tourism.