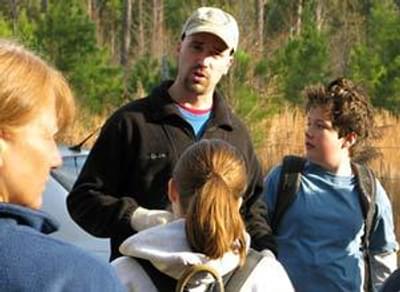 Jeff Brewer was the first president of The Friends of the Mountains-to-Sea Trail and has held the position of leadership ever since.

The Friends of the Mountains to Sea Trail is a nonprofit organization formed in 1997 whose mission is to support the North Carolina Mountains-to-Sea State Trail (MST) with construction and maintenance of the nearly 1,000-mile corridor. In the beginning the state had only three task force groups working on development of the trail, but during the years since Brewer has led the organization he has helped organize nearly 40 task forces across the state.

In the last year and a half, Jeff has had his major advocacy success when he developed an agreement among the U.S. Army Corps of Engineers, the NC Division of Parks and Recreation, and other agencies and communities for a50-mile section of the MST. This agreement is so significant because progress on this section has been stalled for 25 years. As an avid hiker and volunteer, Brewer has set an outstanding example for other trail leaders.