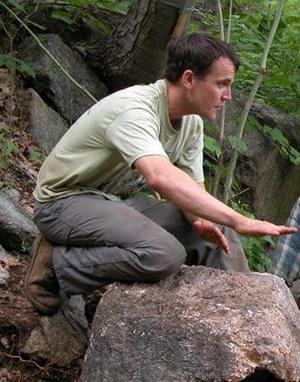 Eddie Walsh, a member of the New York-New Jersey Trail Conference (NYNJTC), has been assisting with trail development and maintenance since an early age.

Eddie has been building trails professionally since 1993. Over the years his passion for trails has led him to become a leader in both training volunteers in the various skills for trail development and coordinating the actual on the ground work.

His true talent and personality is most exemplified with his efforts in the relocation/reconstruction of the Appalachian Trail (AT) at Bear Mountain State Park, the birth place of the AT. Over the years, the trail has experienced considerable use and sections have been realigned. Today, more than 100,000 hikers a year and day users traverse the section from the base of Bear Mountain to the top making it the highest use section of the AT. As a result sections of the trail have been over utilized, resulting in erosion, widening of the trail and general degradation of the trail experience. In response to this, a 10 year effort through a partnership between the NYNJTC, ATC, Palisades Interstate Park Commission (PIPC), New York Office of Parks, Recreation and Historic Preservation (OPRHP) and the National Park Service (NPS) has been mounted to reconstruct and relocate sections of the AT for long-term sustainability and an improved trail experience.

The dedication to trail development and how Eddie relates to the trail volunteers can be exemplified by the Special Project Manager, Chris Ingui:

"The most unique and challenging aspect about the Bear Mountain Trails Project has been the regular commitment to keep novice trail volunteers involved given its long term and highly technical needs. The growing pains from year one have been substantial and Eddie has never waivered in his commitment to keep this incredibly challenging concept together. There were times when others on the project would desire to get rid of the volunteer component due to its strain on the patience. Every time criticisms arose regarding the volunteers Eddie defended the program and pushed forward. This was not done out of mere duty but because he really did and still does believe in welcoming people of all levels to this work that he loves so much. Basically, I have never known anyone else on the project to be as patient, welcoming and genuinely interested in our volunteers as Eddie is.

"I recall meeting Eddie on my first day two and a half years ago and making comment to someone at how humble he was; now that I have gotten to know him and understand just how talented he is, I am truly astonished at how humble he is. He is always open to others’ concepts and never dismisses another idea regardless of who it comes from. His approach to trail work is refreshing; it is not just a job but something he truly enjoys and that rubs off on everyone around him. I learned from his example, even on my toughest days out there, that our job as trail builders really is a great privilege. Every professional that has worked on the project has done an outstanding job and are really remarkable people in their own right, but Eddie has gone so far above the rest of us with his commitment it really is difficult to know where to start. I have regular memories of Eddie coming down the mountain with what seemed to me to be impossible amounts of tools strapped all over his body; of him not only being the first one at the project but the last to leave; of month long stretches where he simply did not take a day off. In fact, even on his days off, he would still be responding to my emails at 2 am and returning my phone calls regularly, so it’s quite possible that Eddie has not taken a day off from this project since he started over 4 years ago. And some how he seems to never slow down or lose his spirit, a spirit that has really drawn every member of the Bear Mountain crew together. In short, I look up to Eddie immensely and am really proud to say that I work with him."

It is through this level of commitment and working relationships with volunteers that makes the trail system a reality and quality experience for all trail users.