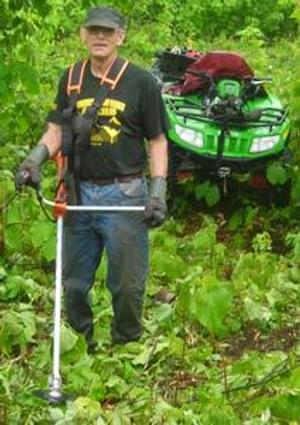 Berlin is home to the newest edition of the New Hampshire State Park system, the 7500 acre Jericho Mountain State Park (JMSP). Managed by the NH Division of Parks and Recreation, Bureau of Trails and primarily funded by trail bike and ATV registrations, the park is expected to be a major asset in the revitalization of Berlin. The Androscoggin Valley ATV Club (AVATV) provides volunteer maintenance of other OHV trails in the area. AVATV then joined in as the official volunteer steward club for the park to assist the State with trail construction and ongoing maintenance.

Just as it expected to help revive the City’s economy, JMSP has already revived AVATV. Leading up to the initial opening of the park AVATV membership increased from 50 to roughly 250. The JMSP Trail Master's role is to coordinate club volunteers and to work directly with the State’s field crew for trail development and maintenance. Longtime Berlin resident and ATV enthusiast Erik Anderson fervently stepped up. Before, during and after the initial trails were opened it wasn’t (and still isn’t) uncommon to find Erik working tirelessly in the park almost every day of the week. Sometimes the tasks don’t come in quick enough for him. During the 2007 summer season Erik logged over 250 hours. Beyond volunteering his time for trail development, Erik also spends much time traversing the park in his orange "ATV TRAIL PATROL" vest looking for trail hazards, helping park guests in need, and informing other riders of the State’s OHRV laws and recommended safety practices.