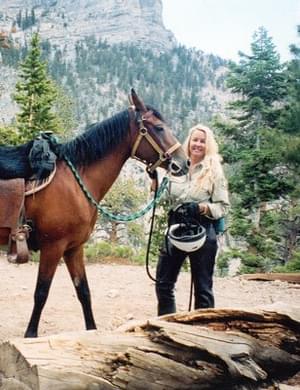 Suzanne has a readily apparent passion for trails and the joy and benefit they bring to people.

Ideas come and go and for an idea to be successful you need a driving force behind it. Suzanne is that force having been directly involved in planning, design, and layout and implementation for over 165 miles of designated trails.

Although Suzanne’s passion for trails has been life-long, she began her career in trails in the late 1980s as an advocate for trails. Her interest at the time primarily focused on trails for mountain bikes, and at this time there were no recognized trails for mountain bikes in the Las Vegas, Nevada area. Suzanne wanted to see that riders had trails to ride and had legitimate access to these trails.

As a volunteer she developed two trails systems; the Cottonwood Valley Trail System and the Twilight Zone Trail System; 50 miles and 25 miles respectively. Since Suzanne was involved with the International Mountain Bicycling Association (IMBA) all of the trails she documented were existing routes; she knew that unauthorized trail creation would not get mountain bike riders very far. And so she worked closely with the federal agencies. Cottonwood Valley and the Twilight Zone trail systems are based on existing wild horse and burro trails and dirt roads. Suzanne explored public lands on her bike and eventually figured out how the trails and roads could be put into loops. These two trail systems resulted in approximately 75 miles of trails designated for non-motorized multiple use.

Working with the Bureau of Land Management (BLM) she mapped the routes using a GPS unit and submitted them to the federal agency for consideration for designation. The timing was very good as the BLM was just starting work on the new General Management Plan for the two newly designated expansion areas for RRCNCA.

During the development of the GMP she participated on public planning teams that assisted the BLM with the development of their General Management Plans for Red Rock National Conservation Area and the newly added southern and northern expansion area for the NCA. Suzanne created the Las Vegas Trails Coalition served as a representative for mountain bikers to relay information back and forth between the agencies and the local riders. 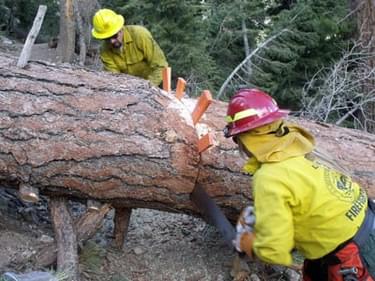 During this time Suzanne also conceived the Blue Diamond to Jean Mountain Bike Benefit Ride which ran for 10 years. This was a 40 mile bike ride from the small town of Blue Diamond to Jean Nevada. The proceeds were used to support regional trails development and maintenance projects. Proceeds were used for supplies, hand tools and to even host a BBQ with the IMBA Trail Care Crew.

In the early 90s Suzanne authored the Las Vegas Single-track Gourmet was published in 1994. This was a waterproof/tear-proof map of regional trails. All of the trails featured were approved by the agencies, and the guide contained information regarding land use ethics and trail etiquette.

Suzanne’s work with the BLM and US Forest Service lead her to seek a seasonal position with one of the agencies. She was hired as a seasonal employee in 1999 with the BLM at RRCNCA. During the off season she worked as a consultant with the Rivers, Trails and Conservations Assistance Program and the Clark County Department of Comprehensive Planning.

Working with the Clark County Trails Coordinator Suzanne worked to develop the Master Trail Plan for Clark County. They worked closely with local trail groups and individuals to create the Southern Nevada Regional Trails Partnership, a trails advisory board for the county. Much of this work focused on gathering and creating GIS and involved collaborations with the City of North Las Vegas, Henderson, Mesquite, Boulder City, the City of Las Vegas and trail interest groups and individuals. This plan was adopted by the Clark County Commission and the Southern Nevada Regional Planning Coalition and is currently in the implementation stages.

A by-product of the data collected and the interaction with local user groups was the proposal for the Spring Mountains Perimeter Trail. Suzanne was the project lead for this trail proposal which was to be a long distance multiple-use trail in and around the Spring Mountains Range with connections to local communities and other recreation opportunities. Working as a consultant for Clark County Suzanne also oversaw the development of the Draft Interpretive Plan for the Las Vegas Strip National Scenic Byway, which was nominated for its’ historic, cultural and scenic values.

In 2003 Suzanne took a permanent position with the US Forest Service where she worked as a wilderness and trails ranger on the Spring Mountains National Recreation Area. She worked with the Spring Mountains Youth Camp and local volunteers to maintain trails and provide information to the public. In 2006 Suzanne promoted to the position she currently holds as the Trails Program Manager for the Spring Mountains NRA. In this position she has designed and laid out approximately 35 miles of new trail. She has overseen the planning, design, and construction of new trails for Blue Tree Trail System, Lovell Canyon Trail System, the Telephone Canyon Trail System and many other smaller scale trail projects.

Suzanne works closely with the trails community in Las Vegas and has worked extensively with volunteers to build and maintain trails, including packing supplies in for trail crews working remotely. She teaches skills to agency personnel, volunteers and partners to help build a work force for trails.