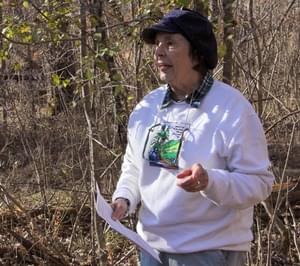 Sally Hausken has done what many thought was impossible in a small, rural based community in west central Minnesota.

Sally has inspired and led hundreds of people to become volunteers to environmental causes, she has been a mentor to the young and old of our community, and she is personally responsible for organizing a broad array of local groups which have made Detroit Lakes a place where the environment matters.

Her work has led directly to the preservation of 117 acres of some of the most sensitive and valuable natural areas in Minnesota, the Sucker Creek Preserve.

Sally serves as a model for citizen involvement. Sally has invested in the future by preserving and maintaining trails for all of us to explore and learn from.