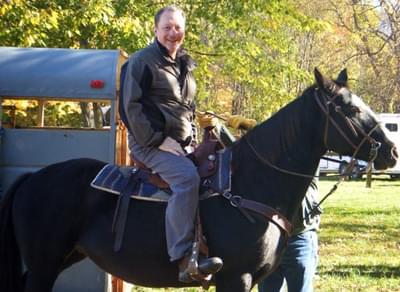 For more than twenty years, Jim Radabaugh and the programs he manages have been the common driving force behind the success of the Michigan trail movement.

Michigan leads the nation in trail development, but trails don’t appear on their own. Trails take grassroots and political support, accessible funding and expertise, motivation, dedication and patience. Often, a driving force and effective coordination spell the difference between success and disappointment.

Jim began influencing and shaping Michigan’s state trail system even before joining the Department of Natural Resources (DNR). As a consultant, he played a key role in developing the “Michigan Statewide Trails Initiative.” Approved in 1991, this plan has been the guidebook for developing recreation trails in the state. Following the Trails Initiative guidelines, Michigan’s network of state trails has grown more than 40% over the past two decades, to nearly 12,000 miles on the ground today.

In 1995, Jim joined the Forest Recreation section of the Michigan DNR. As a licensed landscape architect, he used his talents to design campgrounds and trails throughout the state. Jim later became the State Trails Coordinator and now is the Recreation and Trails Section Supervisor. During his tenure with the DNR, Radabaugh has encouraged and fostered opportunities for innovative, creative “out of the box” business models to continue moving the Trails Initiative forward. Throughout his entire career, he has exerted his influence and applied his expertise to nurture strong partnerships for developing state and local trails. He also has avidly promoted the cause of an interconnected network of such trails throughout the state.

Bringing the state another step closer to this goal, in 2006 Jim co-authored “Michigan Trails at the Crossroads – A Vision for Connecting Michigan.” This report set the stage for a stronger culture of trail development throughout Michigan. The Governor’s office has called for dedicating the resources necessary to complete a statewide interconnected trail network, with the vision of making Michigan THE trail state.

Furthering this goal, Radabaugh oversees and supports the work groups of Michigan Snowmobile and Trails Advisory Council which was established through legislation to advise the Director of the DNR and the Governor on the development and operation of motorized and non-motorized trails. The Michigan trail movement has gained momentum by working through various coalitions to discover innovative and effective methods to accelerate trail acquisition, development and management. Through such collaborations with state agencies, local units of government, volunteers and private partners, Jim and his team have been at the hub of planning and highly successful at bringing new trail miles on line. Today, the State’s extensive network of trails includes 800 miles of non-motorized forest pathways, 3200 miles of off-road vehicle trails, 6300 miles of snowmobile trails and 1200 miles of state rail-trails. Michigan’s pro-trail culture is also benefiting local trail development efforts, with 1400 miles of multi use trails now owned and developed by local units of government. 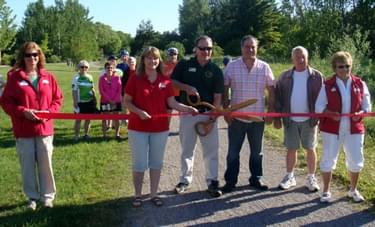 Jim is deeply committed to building and connecting a diverse network of both regional and local trails and is highly regarded for his work throughout the state. His interest and passion for trail development go well beyond the typical hiking and biking trails and he is esteemed by diverse user groups. At the local level, he engages and empowers groups representing the full spectrum of trail users.

He has worked closely with 98 snowmobile and off-road vehicle trail grant sponsor groups and formed strong partnerships with local units of government and trail authorities.

The Michigan Horse Council recently honored Jim with their 2012 Catalyst Award, recognizing his work and service to the Michigan Equine Industry. With more than 1,000 miles planned, Michigan has the distinct honor of hosting the most trail miles of any state along the North Country National Scenic Trail. As a champion of trail collaborations, Jim was instrumental in executing a Memorandum of Understanding between the United States Department of Interior National and the DNR to accelerate completion of Michigan’s portion of this national treasure.

As manager of the motorized recreation trails programs Jim encouraged and supported initiatives that pushed the envelope. An example includes a multi-year study conducted by a consulting firm to evaluate wearabilty and life expectancy of various asphalt paving mixes used on multi-use rail-trails. As a result of this work, the DNR received the National Asphalt Pavement 2004 Quality in Construction for Nontypical Pavement. The specialized asphalt mix has become the standard for paved state rail-trails due to its extended life and durability. Jim has also supported studies regarding the economic impact trails.

Jim has been at the forefront of rail-trail collaboration capitalizing on partners’ strengths and maximizing efficiencies. A successful example is evident in Jim’s work with the Michigan Department of Transportation, where he helped create a MOU allowing the two departments to collaborate on the acquisition, development and management of state rail-trails. This MOU has significantly helped difficult projects become realities sooner. Two of these state trails have been recognized by the US Department of Interior as National Recreation Trails: the Musketawa State Trail and the North Central State Trail.

Under Jim’s leadership, the DNR has also been cultivating a public private partnership model to address the long-term sustainability of a new regional rail-trail network in the heart of Michigan. This 125 mile system passes through six counties and will become the 5th longest rail-trail in the U.S. Jim leadership and guidance for this collaborative effort of volunteer friends groups, local units of government, the National Park Service Rivers and Trails Conservation Assistance Program and the DNR. A new Trail Authority formed by two counties and one city will be responsible for daily management and maintenance and for providing valuable local input for trail design, construction and management. Friends groups will provide advocacy, fundraising and volunteer labor. The project is funded through federal and state grants, a generous gift from a private foundation, contributions from the counties, cities, villages and townships, and funds raised by the friends group. Construction will begin on 52 trail miles in 2013. Jim conceived the idea of a maintenance endowment to help fund the long term operation of the trail, and helped convince a private family foundation to contribute $3 million toward this goal. This partnership is exemplary of Jim’s leadership and is setting the standard state-wide for future trail projects.