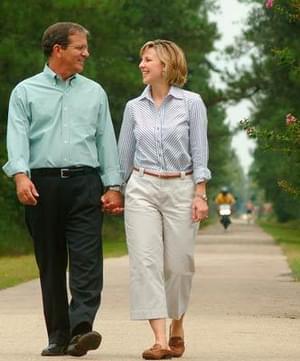 Parish President Kevin Davis is called the Father of the Tammany Trace.

His vision began over 15 years ago with the purchase of the abandoned Illinois Central railroad corridor. Many members of the community were somewhat hesitant to be supportive of this venture. Others welcomed the idea and so, from that moment, the journey began.

The Trace is one of the largest tourist attractions for our parish, and has a positive economic impact on surrounding businesses. The Tammany Trace not only preserves the railroad tracks, but also the natural landscapes and animal life. Most importantly the Tammany Trace connects our history and culture by connecting people to the past.

The trace is a multifunctional trail, which can be used by walkers, joggers, bikers, inline skaters, wheelchairs, and equestrians. An equestrian trail parallels parts of the trail and the horses are only allowed on the main trail to cross over bridges.

In the beginning, some people were concerned that their property values would decrease as a result of the Trace, but in fact, the opposite has happened. Those who are lucky enough to have the Tammany Trace as part of their backyard now use the Trace for family outings and group exercising. You can see families riding bikes, walking and visiting across the path with their neighbors, families, and friends. The Trace is also a part of the training for the local fire and police departments, and many schools use it for their athletic training. We have connecting paths to schools and parks along the Trace and have plans for more with the help of the Recreational Trails Funding Program. The Trace has proven itself to be a welcomed addition to our Parish and our State.

The final link will not take the usual route but be a part of another special project for our parish, Camp Salmen. Camp Salmen bike paths will help connect the Trace to downtown Slidell. One of the major funders for many of our projects is the Recreational Trails Program. The Trace connects five communities— Covington, Abita Springs, Mandeville, Lacombe, and Slidell. Where East meets West best describes the Tammany Trace, which connects both sides of the parish. This connection was made possible by the Recreational Trails program that helped to fund the Bayou Lacombe Draw Bridge project that was completed in 2008. The Trace crosses over 31 bridges of bayous, streams, and swamps, and goes through a state park. On any given day, you are likely to see a wide variety of birds, many animals including deer, rabbits, and raccoons, and, of course, our famous Louisiana Gators.

It all began in December 1992, with Mr. Davis spearheading the efforts. Federal monies, grants, and many fundraisers have contributed to the development and maintenance of the Trace. A $75,000 planning grant from the Regional Planning Commission contributed some of the first funding secured for the project. Transportation Enhancement Provisions of ISTEA (Intermodal Surface Transportation Efficiency Act) also provided funds for the construction. ISTEA was the first Federal Transportation Legislation intended for walkers and cyclists rather than automobiles. Mr. Davis is founder of the Tammany Trace Foundation and to this date, remains the Chairman of the Board. He works closely with the Board of Directors to oversee the operations of the Trace.

The Trace also serves as a transportation corridor. We have a “link” to a St. Tammany Parish Jr. High school and a Sr. High School and have plans for more of these connections. There are over 20 schools that are within walking distance or a short ride to the Trace. It provides a safe means of transportation as an alternative to walking or cycling along the streets with vehicles. Also, we just recently completed the construction of a crossover link to a park in the Lacombe area— Chahta Ima.

The Tammany Trace is a valuable asset that is beneficial to St. Tammany Parish. The paths are open seven days a week from 7 a.m. until dark. The Tammany Trace has rangers who patrol, offer assistance, and provide information to tourists at trailheads and on the trails. The trace has had visitors from all over Louisiana, the United States, and even other countries. In 2002, about 95,000 individuals visited the Trace. Today, the numbers have tripled and we saw about 287,050 visitors in 2009.

The Tammany Trace brings many groups together. During our annual Holiday of Lights event in December, we have school performers, churches and other organizations that entertain the thousands of visitors we have for the event. We also welcome all the schools in the Parish to decorate a Christmas tree to be on display during the event. This event has proved to be a community effort and we will continue to improve with the joint efforts of the parish. Many of the Trailheads located along the Trace host events throughout the year. We work in close contact so that we can offer our users a variety of diverse cultures and heritage celebrations for their enjoyment.

The Trace provides several different stops along the path to rest and hydrate oneself at the facility in each community. At the Tammany Trace Headquarters, you will find Louisiana’s only Boundless Playground, called Kids Konnection. This ‘Boundless Playground’ allows a place for all children, with or without special needs, to play together. The playground is 70 percent handicap accessible offering slides, swings, obstacles, and sensory experiences such as sand, plants, and sound for those individuals who are hearing or sight impaired. Those with autism can also greatly benefit. Kids Konnection also provides designated areas for parties and events.

Mr. Davis has been working for 15 years on the Tammany Trace project. He has faced many obstacles and has probably lost sleep in many cases, but he will be the first to tell you it was all worth it. He speaks frequently to many groups and organizations nationally about the Trace and the many benefits it provides to our parish. He works diligently to improve the quality of life we have in St. Tammany Parish. This is the reason St. Tammany Parish is one of the fastest growing parishes in the State of Louisiana.