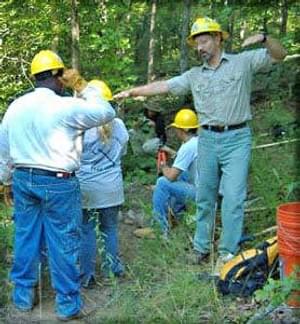 As a self-confessed "trailoholic," whether as an equestrian, backpacker, mountain biker, trail runner, volunteer, crew leader, or whatever, Brian spends most of his time on trails.

Over a period of years he accumulated nearly 4,000 hours of volunteer trails service with the US Forest Service, culminating in his being presented with the Individual Volunteer Service Award for trail work by the USDA Forest Service. That passion led to Brian’s employment with the US Forest Service, and currently he serves as the Trails Specialist for the Shawnee National Forest in southern Illinois where he is in charge of the creation of a designated trail system consisting of 223 miles of equestrian and hiking trails through both wilderness and non-wilderness areas. Brian and his trail crew have been awarded the prestigious "Traditional Wilderness Skills and Minimum Tool Leadership Award" by the US Forest Service’s Region 9 in both 2006 and 2007 for their exceptional work constructing trails within the Lusk Creek Wilderness.