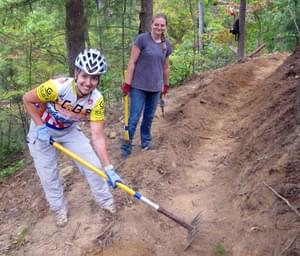 Terry's hard work is pure volunteer effort. Not only does she gets the job done but she encourages others to be involved as well!

I would like to present Terry Palmeri for consideration for the Trail Advocacy Award for Georgia. I have been fortunate to become part of the mountain biking world through co-ownership of Mulberry Bike Mountain Bike Get-A-Way. Because our focus and time are concentrated within Mulberry Gap and its surrounding trails, our experience has been different from the other letters of praise and endearment that are enclosed in this submittal.

Terry and Mike performed their marriage vows at our mountain get-a-way and little did we know what an asset she would prove to be in this community. Gilmer County is the designated Mountain Bike Capital of Georgia and Terry is known as “the Queen” because everyone knows she has become the “go to” person for anything to do with biking in the area. Her hard work is pure volunteer effort. Not only does she gets the job done but she encourages others to be involved as well!

Terry and Cartecay Bike Shop put on a summer ride called Drama Queen, an annual fun event at Mulberry Gap where trail donations have been collected in excess of $1000 since 2010. We also hosted the 2012 annual spring trails work weekend where Terry rounded up 76 volunteers to work on the Pinhoti and Bear Creek trails. She leads many no drop rides for cyclists that need her encouragement and patience, She participated in the September 2011 Freedom Ride to New York City to commemorate the 10 anniversary of 9-11. 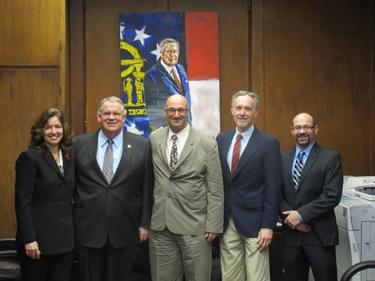 Terry is the first to volunteer for the hard job of trail upkeep and trail building. She helped to create the expansion of Amadahy, an excellent beginners trail on Carter’s Lake. While this trail was being completed, she was already working with IMBA and local advocates on acquiring land for new trails and upgrading existing trails that are no longer sustainable.

Besides being President of the local Ellijay Mountain Bike Association for two years, working in the bike shop, attending summits and board meetings, she keeps us informed, involved and excited for what lies ahead. She is working with city leaders to include a bike path in a new city park that is being created and has become a valuable asset to the local Chamber of Commerce in promoting bike related opportunities in the area.

We hope you will enjoy reading through the submittals of Terry’s many community events as well as awards, accomplishments and acknowledgements. Ellijay has become a mountain bike destination in it’s own right and as we work under Terry’s leadership toward obtaining the IMBA Ride Center designation, we are proud to be part of the economic growth and reputation of our fine town.