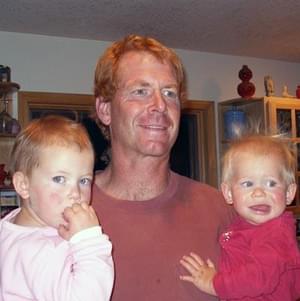 Upon meeting Kevin and receiving his powerful hand shake, one could not help but noticed the commanding presence that this tall, strong, redheaded, blue-eyed force of nature created. Couple those physical attributes with a day working on the trail and people quickly realized that Kevin’s uniqueness extended beyond superior athleticism. Kevin was an extremely positive individual that lived life to the fullest. His optimism was very motivating and contagious as he would wholly devote his energy towards whatever individual, task, rock, tree, mule, etc. that was before him. This powerful focus, along with an exceptional work ethic, made Kevin a natural leader and subsequently he excelled in the National Park Service (NPS). The ability to authentically communicate made Kevin an outstanding supervisor, mentor, friend, and trails advocate.

Kevin and his family deserve this posthumous lifetime service award given Kevin’s longstanding dedication to technical trail maintenance and reconstruction skills, project implementation, and leadership and mentoring legacy which ultimately continues to “preserve our natural resource for this and future generations” (National Park Service Organic Act, 1916).

Kevin’s technical trails skills were commensurate with his physical presence and mental acuity. In every aspect, Kevin would lead the charge—whether hiking to and from the project site, laying rock, performing bridge work, material handling and rigging, tread and corridor maintenance, animal packing, equipment and chainsaw operation and most importantly, safety. He had the innate ability to perform these tasks to an inspirational level of both quality and quantity.

During his tenure as trails supervisor, Kevin managed approximately 100 miles of trail and collaborated with other Park work groups as well as with other governmental agencies, non-profit groups, and volunteer groups. Some of these groups included the National Forest Service, Continental Divide Trail Alliance, Australian Trust for Conservation, Student Conservation Association, Headwaters Trails Alliance, and many youth corps and individual volunteers. Kevin’s many accomplishments are too numerous to list, but a few highlights include the realignment and reconstruction of the Continental Divide Trail, construction of the accessible Coyote Valley Trail (the first and only accessible trail in the CRD), Adams Falls, Forest Canyon Overlook and relocating the CRD Barn and Corral. He was also instrumental in performing many trail condition assessments that laid the foundation for projects that are being carried out today.

Perhaps Kevin’s greatest contribution to the trails at RMNP, the NPS, and the greater trails community is his lasting influence on past, present, and future generations of trail workers. Kevin embodied the essence of trail crew culture; a strong work ethic, adaptability, genuine empathy for co-workers, volunteers and visitors, and respect for the physical environment. Kevin was a pacesetter, working extremely hard, yet always prioritizing safety in himself and in others. In the ever changing natural conditions, Kevin adapted to each unique situation and amiably took the changes in stride. Finally, Kevin’s phenomenal leadership and mentoring ability touched employees and volunteers from around the globe. His significant contributions will live on in the trails of the NPS, RMNP, and in the many trail crew workers he fostered.