The 819 mile Arizona Trail evolved from one man’s dream in the 1980’s to a congressionally designated national scenic trail.

The Arizona Trail connects mountains, deserts, canyons, communities and people across the state from Mexico to Utah. Trail development activities by numerous volunteers and agencies over the past 25 years concluded with completion of the trail on December 16, 2011.

This outstanding achievement was made possible by the Arizona Trail Association (ATA) and Dave Hicks in particular. Dave served as the ATA Executive Director from 2005-2011. During that time he worked full-time for the ATA with little pay; he worked for free! Dave donated his time and skills to strengthen the volunteer program that helped to build and maintain hundreds of miles of trail.

Dave’s tenure saw the membership of the ATA more than double. He promoted the Arizona Trail with communities and businesses, brought in thousands of dollars in contributions and donations, secured grant opportunities, and nurtured strong relationships with partner agencies. He pursued the objective of completing the trail with unwavering tenacity.

Dave’s ability to bring people together to accomplish the critical steps needed to make the final connections, and to promote national scenic trail designation, contributed greatly to completing the Arizona Trail.

The last 1 1⁄2 years prior to Dave’s retirement in January 2012 was a very critical period in closing the final gaps in the Arizona Trail. With two major connections left to be completed, Dave was at the table and on the ground with multiple partners and played a leading role in facilitating that effort.

For the Gila River Canyons Passage in particular, his involvement was critical in the partnership with mining company, ASARCO, the Bureau of Land Management, Pinal County, and the ATA in developing the trail in the Red Mountain area and Kelvin in coordination with anticipated future land uses.

His perseverance and focus on the objective of completing the trail helped keep the momentum going on several interrelated projects that involved ASARCO, the BLM, ATA volunteers, and equipment provided by Arizona State Parks. This ultimately led to the completion of this passage and the final link for a fully connected Arizona Trail.

Working full-time and then some as the ATA Executive Director, Dave set exemplary example of leadership, partnership building and volunteerism. 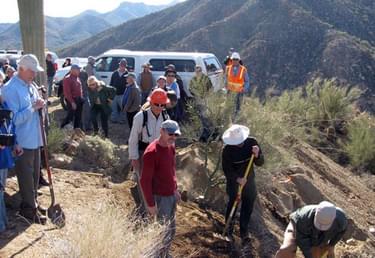