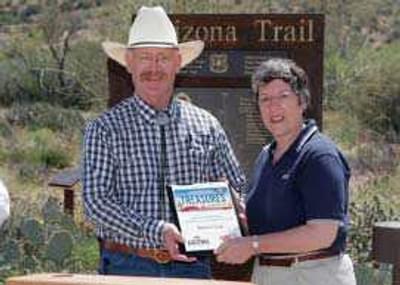 Shewalter, the first Arizona Trail Steward Coordinator under the sponsorship of the Kaibab National Forest.

As nearly 70 percent of the Arizona Trail is located on national forest lands, the implementation of the Trail made a significant leap forward in 1988 when an Outdoor Recreation Planner position was made possible through funding from the Kaibab, Coronado, Tonto, and Coconino National Forests.

On July 1st of that year, seven miles of the proposed 50.5 mile Kaibab Plateau Trail were dedicated and opened to the public as the first segment of the Arizona Trail. The dedication on the North Rim of the Grand Canyon attracted 250 people to the remote site. Upon its completion in 1989 the Kaibab Plateau Trail became the first major leg of the Arizona Trail. In 1994 The Arizona Trail Association, the non-profit organization supporting the development of the Arizona Trail, was established. Dale has served continuously on the board since its creation, including a stint as President of the Board. He has spoken about the trail to numerous organizations. And he has continued to maintain and build the trail, with long service as a segment steward, as his health has allowed.