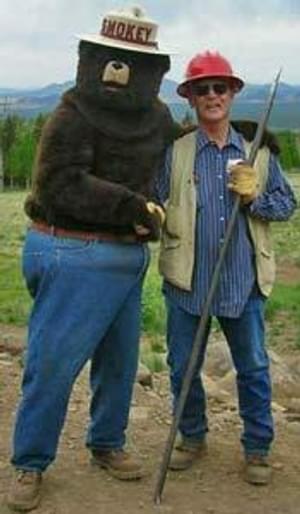 Dale, with friend Smokey the Bear

The vision of a continuous border-to-border trail traversing Arizona's unique landscapes and historic areas had been on the minds of trail users through the years.

One individual, however, took the dream and made it a reality. Dale Shewalter visualized a long-distance trail while hiking in the Santa Rita Mountains near Tucson in the 1970's.

During the summer of 1985, Dale completed scouting the trail route. While walking from the Mexican border to the Utah border, he visualized and tentatively mapped an interlocking route of trail systems traversing the state from south to north. Beginning at the Mexican border, he projected a 750-mile route through desert and mountain corridors all the way to the Utah state line. The concept of the Arizona Trail was born, offering opportunities for hikers, equestrians, mountain bicyclists, and cross-country skiers to experience the rich diversity Arizona has to offer. Shewalter, during the next few years, began promoting his vision of a border-to-border trail to key state and federal agencies, service groups, corporations, and individuals. Much interest was evident. He proposed the Arizona Trail concept to the Arizona State Parks Board in 1985, gaining the support and enthusiasm of Larry Mutter, then State Trails Coordinator. The Arizona Hiking and Equestrian Trails Committee (now known as Arizona State Committee on Trails or "ASCOT"), the citizen advisory committee to the Arizona State Parks Board, also endorsed the trail concept early on and have since been helping to coordinate the project.