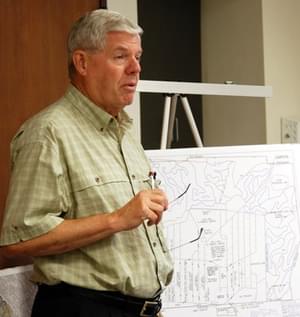 Danny J. Hubbard offers his time to help save land.

Danny and his wife, Charlotte, lived in the metropolitan Atlanta area for approximately 35 years. They have one daughter, Natalie, who resides in Marietta, Georgia. After retiring from Blue Circle North America, Danny and Charlotte moved back to Alabama and built a home in Oxford, Alabama, where they reside today.

Not long after returning to Alabama, Danny discovered that a large gift of federal land was not being used for its original intended purpose. By asking around and searching the internet, he discovered that a locally based advocacy group, the Cheaha Trail Riders (CTR), had begun efforts to convince public officials of the need to protect, maintain, and develop the park for diverse trail use. Danny joined their ranks and offered his time to help save this parkland.

Danny’s corporate career was in the field of information technology, so it was CTR’s good fortune when Danny agreed to become their webmaster. It wasn’t long after that the CTR website became, and still is, the best source of OHV trail development news for Alabama. Danny also demonstrated a desire and ability for event planning and organization. Soon he became CTR’s Public Relations Director, the position he currently holds.

This writer became acquainted with Danny in early 2008, not long after I had accepted my current position at ADECA. Danny was one of the first members of Alabama’s trail user community to contact me, congratulate me, ask me how much grant money I had available, and invite me for a tour of the Coosa River Annex property (now known as TOP Trails Park), the large federal lands-to-parks project mentioned above. Danny had organized the tour down to the finest detail, including transportation, guides, radio communications, maps, and printed information about the plans that CTR was proposing.

Later that same year, CTR with Danny’s leadership hosted a public meeting that was attended by 75 people for the purpose of educating local citizens and leaders about the recreation and economic potential of TOP Trails. Presentations were made by St. Joe State Park (Missouri), various OHV manufacturers, Trails Unlimited, ADECA Recreation Programs, and others. Danny even managed to convince Governor Bob Riley and Conservation and Natural Resources Commissioner Barnett Lawley to fly in to attend. I am happy to report that largely due to CTR’s and Danny’s exhaustive efforts, a public park authority formed by representatives of both the cities of Lincoln and Talladega won approval by the National Park Service to own, develop and operate the park for outdoor recreation and trails use, primarily for off-highway vehicles. Development of trails and trailhead facilities is underway. 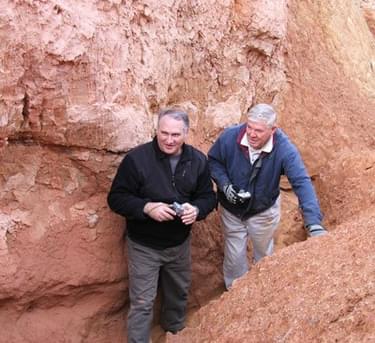 But this is only one project Danny was and is working on. In April 2009, Danny and CTR President Glenn Myers made a presentation to the Alabama Forestry Owners Association at their annual meeting. Danny and Glenn educated the attendees about an alternate use of their forest land, one that they probably hadn’t seriously considered before: trail development. It wasn’t long after that meeting that CTR was contacted by a private forest owner in a nearby county who had seen their presentation and wanted to talk further. By July, Doc Hilt Trails in Clay County, Alabama, opened to the public.

Over the past few years, Danny and CTR organized several volunteer workdays at Doc Hilt, as well as at other OHV parks in Alabama: Minooka Park in Chilton County, Stony Lonesome Park in Cullman County, and Kentuck OHV Park in the Talladega National Forest. In September 2009, Danny and CTR met with local officials at Geneva State Forest in south Alabama.

Geneva State Forest (GSF) is an active state forestry operation encompassing over 7,000 acres and includes forest roads, fire breaks, and trails. Danny, CTR, and CTR Team Leader Lynn McMillen are currently assisting GSF in developing a comprehensive plan for the development and management of outdoor recreation activities, as well as obtaining grants for development. All of Alabama’s publicly-owned OHV parks as well as several privately-owned ones are promoted on CTR’s website.

Danny doesn’t just organize events and meetings, or manage a website. He also writes grant applications. When a deadline was drawing near and the person tasked with the preparation of the application suddenly wasn’t able to produce, Danny stepped in, wrote the application, and submitted it on time. Danny has successfully submitted RTP applications to fund a CTR project co-sponsored with the San Dimas Technology and Development Center of the USDA Forest Service; a CTR trail safety and environmental education project utilizing a surplus FEMA travel trailer (2010); three RTP grant applications for motorized and non-motorized trail development totaling $1.2 million on behalf of TOP Trails Park (2009-2012); and three LWCF applications for park development at TOP Trails Park totaling $150,000 (2009-2012).

On several occasions, Danny and CTR organized “Clean-Up Days” at TOP Trails Park. Again, as he has so many times before, Danny plans the events down to the smallest detail. For example, over 100 local citizens, community leaders, CTR members, and volunteers showed on a sweltering Saturday in June 2010 to pick up trash and debris, eat a few hot dogs, win a few door prizes, shake hands with local leaders, but perhaps most importantly, learn more about the awesome potential of TOP Trails Park and share in the dream. That’s true advocacy in action.