Trailhead and Trail Construction in the Shawnee National Forest 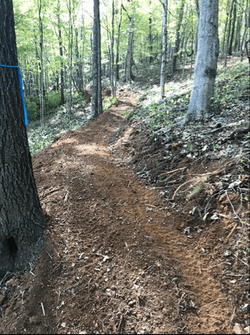 The Shawnee Trail Conservancy (STC), a 501(c)3 trail advocacy organization in southern Illinois, engaged officials at the US Forest Service/Shawnee National Forest (Shawnee) in a public-private partnership to utilize Recreational Trails Program (RTP) funding to improve access to public lands for hikers, backpackers and equestrians. The project also enhanced public safety, improved trail conditions and decreased impacts to water quality within the Candidate Wild and Scenic--Big Grand Pierre Creek. This public-private partnership utilized $200,000 between 2014 and 2018 in completing this work.

Trail use represents the most important recreational use of the Shawnee, with hundreds of thousands of hiker visits annually. Equestrian use of Shawnee trails is among the highest in the eastern US. It is estimated that over 40,000 equestrians drive in from several states to stay at one of 16 permitted horse camps that exist adjacent to the National Forest. The economic contribution of this visitation is important, particularly in Pope County, Illinois, where many of the camps are located. Rural Pope County also hosts the annual 9-Day Trail Ride, the largest recreation event on the Shawnee, and one of the largest equestrian events in the country.

Realizing the importance of access to the trail system the STC Board partnered with the Shawnee to construct two new trail heads at critical locations within the forest. The trailhead at Benham Ridge was located to avoid private lands, where changing ownership threatened public access. The trailhead accesses the One Horse Gap area, heavily used during the 9- Day event but also of importance to backpackers using the 160-mile River-to-River Trail that traverses southernmost Illinois between the Ohio and Mississippi River (and is the southern Illinois segment of the American Discovery Trail). The River-to-River trail runs through the Benham Ridge Trailhead and provides a re-supply point along this multi-day route. 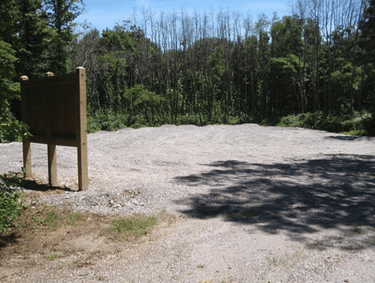 A second trail head was constructed near the Garden of the Gods Wilderness. The Golden Circle Trailhead is used by hikers and equestrians to access numerous trails on Karbers Ridge, one of the most unique geological feature in Illinois. Not only does the trailhead provide access but it helps disperse use in the nearby Garden of the Gods Wilderness. Both trailheads are used by the local community as well as visitors to the equestrian camps, who can vary their experiences by trailering beyond the trails adjacent to their campground.

This RTP project also relocated 5.4 miles of trail along Big Grand Pierre Creek, a candidate Wild a Scenic River. The trail that was replaced was user created in a location immediately adjacent to the creek. It was not maintainable in its former location and was a source of siltation into the creek. The RTP project designed a new trail farther upslope where the entire length was excavated into the side hill with a full bench. Meanwhile the old location was decommissioned. The new trail is sufficiently far up the side slope that siltation is no longer a problem.

This RTP project on the Shawnee National Forest enhanced public lands by providing safe places to park for hikers and equestrians. Furthermore it addressed impacts of erosion and siltation and helped spread use in wilderness, improving opportunities for solitude.

This RTP project maintained and rehabilitated trail by moving it off of an old user-created alignment to a new, side hill location where it was designed and constructed to improve user experience while limiting erosion.

This public-private partnership pooled resources to increase recreational access to public lands. It encouraged multiple use management by providing trails and trailheads to be shared by hikers, backpackers and equestrians through portions of the Shawnee that all three groups were already using.