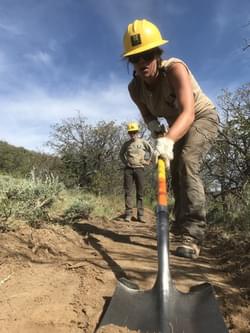 This project required an easement across private property to access the San Juan National Forest. Labor was provided by the Southwest Conservation Corps, Southwest Colorado Cycling Association, and Mesa Verde Backcountry Horsemen, with additional funding from the National Forest Foundation.

From its very inception, extending through the visioning process for the trail, the development of the trail alignment, the fundraising for and the construction of the trail, the McPhee Overlook Trail has been a strong example of realizing the benefits of collaborative conservation work.

In its visioning process, the construction of a new trail promised local residents unparalleled local access to the San Juan National Forest directly from the Town of Dolores and it offered those same residents the promise of added economic development.

As a result, many local stakeholders from a broad spectrum became involved in the project. In the development of the alignment, to connect the Town of Dolores to the Forest, the Town first had to secure an easement across private property, which it did, to connect the trail to town owned land for the trailhead.

The fundraising involved local stakeholders committing funds and volunteer labor time and to then also work as a group to pursue State, private and Federal dollars to complete the project. The construction phase also included local volunteer groups, the local youth corps, the local US Forest Service (USFS) trail crew, as well as a specialized USFS technical trails team. 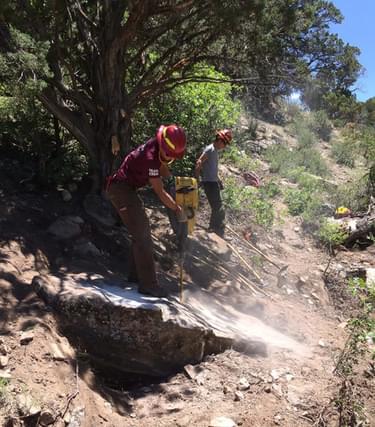 The Southwest Conservation Corps began the trail construction, connecting the trailhead, through steep slopes and sandstone bedrock, to USFS land on top of the mesa above McPhee Reservoir. A grant from the Great Outdoors of Colorado, secured by the Town Manager of Dolores, funded that first phase of construction completed in the fall of 2014.

This first phase was very technical trail work and involved the use of portable winch systems, known as grip hoists, to move large boulders to build massive switchbacks on steep slopes as well as cutting the trail through a narrow sandstone canyon to connect to the Forest.

In 2015, the San Juan National Forest received a Colorado State Trails Grant to fund the next phase of the trail, receiving $105,600, of which $73,312 were Recreational Trails Program Funds. This funded the U.S. Forest Service Trails Unlimited Team to do some blasting work as well as 12 weeks of Southwest Conservation Corps to complete the trail the alignment.

A grant from the 21st Century Conservation Service Corps of the Washington, DC Office of the Forest Service provided $63,000 more to fund conservation corps work. In total, in 2016, SCC crews completed 22 weeks of trail construction and also worked alongside volunteers from the Southwest Colorado Cycling Association, who put in numerous workdays to help refine tread.

The completed McPhee Overlook Trail consists of a healthy mix of beginner to advanced terrain for multiple users. Beginning near McPhee Reservoir on Town of Dolores property, it quickly climbs out of the valley via several switchbacks and retaining walls previously constructed by the Southwest Conservation Corps. Once on the mesa top, it winds along the edge of the mesa where it then drops and climbs in and out of Pinyon-Juniper lined canyons. Ultimately, the trail reaches a Forest Service campground, House Creek, and ties into the Boggy Draw trail system, a 35-mile nonmotorized single track system.

Trail systems are also important to the local economy. Specifically, out-of-town visitors to local nonmotorized trails are reported to add an average of $36.55 per day per person to the local economy, according to a report on the economic impacts of mountain biking completed for the Town of Dolores. 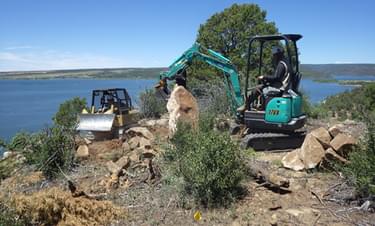 Trailbuilding machines at work with McPhee Reservoir in the background

This is not only evident in sales at local bike shops, but also in the parking lots of grocery stores, gas stations, restaurants and hotels. Field reviews of vehicles at existing nonmotorized trail heads and interviews with trail users show that over one third of trails users come from more than 45 miles away to use local trail systems. The addition of the McPhee Overlook Trail is a boon to the local economy with its trailhead located within the Town of Dolores.

The trail also provides local residents with easy access the Forest, walking, biking or horse riding into the Forest from Town without the need to get into a car to drive to a trailhead. This certainly benefits local youth and low income residents who may not own or have regular access to a vehicle. Being surrounded as it is by the Forest, the residents of the Town of Dolores now have an access that is directly connected to their community.

Interpretive panels have been in designed for the trailhead in the town of Dolores that highlight both the natural and cultural resources for user education. Much of the uniqueness of the trail lies in the dense archaeology of the area that required extensive planning and field work in order to avoid cultural resources. The vista is stunning with views of McPhee Reservoir below and the Four Corners in the background. The interpretive panels help ground trail users in the uniqueness of the place and encourage respect for the landscape.

Furthermore, the McPhee Overlook Trail is part of the Wildland Urban Interface, where communities are adjacent to national forests. For this trail project, the Forest Service and the Town of Dolores plans specified that trails would integrate both urban and forest experiences while allowing the community to benefit from easy access to trails resulting in improved quality of life and health.