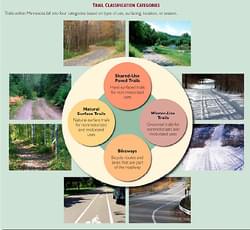 The Minnesota Recreational Trail Users Association— MRTUA— is made up of volunteer members representing a variety of trail user groups. There are 30 volunteers on the committee, three from each of 10 trail activities. This diverse group of trail users has the potential for conflict between recreation types; however, MRTUA's diversity has led instead to thoughtful and high quality policy direction relating to the RTP. MRTUA members are volunteer leaders on statewide trail issues and also within their recreation type.

MRTUA identifies common needs among the different groups using trails in Minnesota, and constitutes a broad political base to support trail opportunities in the state. MRTUA has been designated as Minnesota's official advisory committee for RTP, an unusual situation.

An important MRTUA function is to advise the Minnesota Department of Natural Resources on the distribution of RTP funding. MRTUA evaluates 90+ RTP grant applications annually, comes to a consensus on these applications and makes its recommendations to the DNR, which has the final responsibility for awarding grants but has typically embraced the group’s recommendations.

MRTUA has promoted cooperation among user groups, kept trail issues on the political agenda, promoted statewide cooperation between recreation user groups, and provided valuable direction and project selection for RTP funding. All of this has been completed with the highly dedicated and energetic volunteer organization.

In its nomination of MRTUA for this award, the Minnesota DNR said: “MRTUA is one of the finest examples of success in how an RTP advisory committee can successfully engage its constituents to result in successful program guidance. MRTUA has received requests to explain to other states’ advisory committee our model of success. In addition, MRTUA's volunteer board received the President's Volunteer Service Award in 2007 for 900 hours of volunteer service.”