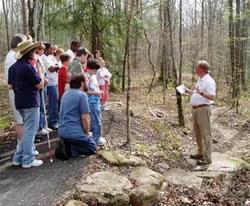 The Council on Greenways and Trails includes representatives from all trail user groups. The 15-member Council consists of both non-government organizations and local government members.

The Tennessee Department of Environment and Conservation’s Recreation Educational Services Division is the administering agency for RTP grants, which are distributed biannually. The Council works in partnership with the Division, evaluating the grant-application process at the end of each cycle and making recommendations for changes and improvements.

One Council recommendation accepted by the Division for the last two grant cycles was to provide nonprofit organizations with the opportunity to apply for RTP funds for projects on public lands as long as a written agreement was in place between the nonprofit and the public agency.

This initiative has helped fund projects on federal lands and provide for other unique public/private partnerships. The Council has initiated three statewide Greenways and Trails conferences and was also very involved in the development of the state’s Greenways and Trails Plan. Since the inception of the Plan in 2008, Tennessee now has greenways or trails in 85 of its 95 counties.

The foremost initiative the Council has undertaken is the marketing and branding of the Tennessee Greenways and Trails Program:

The RTP education funds allocated for this project were matched with over $250,000 of donated services, specifically donated billboard space. The Tennessee Department of Health was so impressed with the Council’s marketing program that they approved using a $25,000 obesity grant from the Centers for Disease Control to purchase air time for the radio PSA’s to help increase physical activity outdoors.