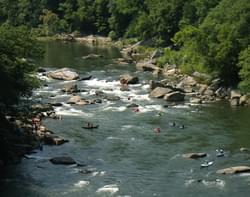 The Youghiogheny River Trail has 27 miles of trail in the Ohiopyle State Park and is part of the Great Allegheny Passage that connects Pittsburgh, Pennsylvania and Cumberland, Maryland. The flat, crushed limestone trail was once the rail bed for the Western Maryland Railroad.

This trail is suitable for all ages and accessible to people with disabilities. Rental bicycles are available. The trail is excellent for hiking, jogging and cross-country skiing and can be used to combine a bike ride or hike with some excellent wilderness trout fishing or hunting.

One of the great natural and commercial routes through the rugged Allegheny Mountains, the scenic Youghiogheny Gorge was actually used by two competing railroad companies. When the two companies merged, only one track was needed and the second was abandoned in 1976.

The portion of the abandoned corridor within the state park was acquired by the Western Pennsylvania Conservancy and sold to the state. In 1986, the panoramic trail was opened to the public.

Ohiopyle State Park surrounding most of this corridor is one of the largest parks in Pennsylvania at 19,046 acres. The most striking natural feature is Ohiopyle Falls, but the park has four other waterfalls and trails with scenic overlooks of the Yough gorge through Laurel Ridge, which reaches 2,920 feet in the park. 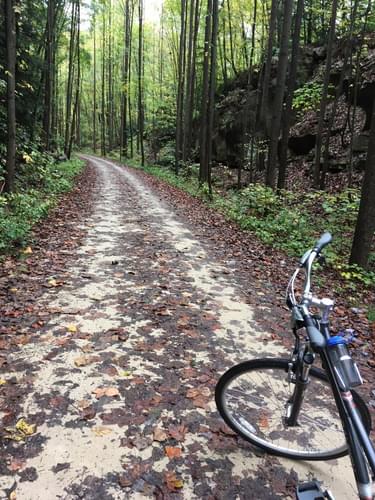 The park's popularity was traditionally based on its river recreation, primarily canoeing, kayaking, and rafting. The development of the Youghiogheny River Trail and the mountain bike trail on Sugarloaf Mountain has provided a more diversified recreation experience.

Ohiopyle State Park was nationally recognized in 2010 with a Gold Medal Award as well-managed, innovative and for its leadership in connecting people to nature. The highest honor for a park system, the award comes from the American Academy for Park and Recreation Administration in partnership with the National Recreation and Park Association.

From the Ramcat Launch Area and Trailhead Parking Area in the east side of the park, the trail descends at a 1% downhill grade to the Train Station/Visitor’s Center parking lot in the town of Ohiopyle. Bikers/hikers can enjoy this 10-mile trail section and watch canoers and rafters travel through the class I and II rapids.

From the Train Station/Visitor’s Center parking lot in the town of Ohiopyle, the 17 miles of trail crosses the river twice and descends at a 3% grade to the western park border. Visitors can also park in Ferncliff Peninsula Parking Area. Bikes are not permitted on the trails of the Ferncliff Peninsula. Along the trail are mile markers and posts with the initials of the famous rapids in the river. There is plentiful parking in the town of Connellsville in parking lots on Third Street and in the Youghiogheny Riverfront Park. 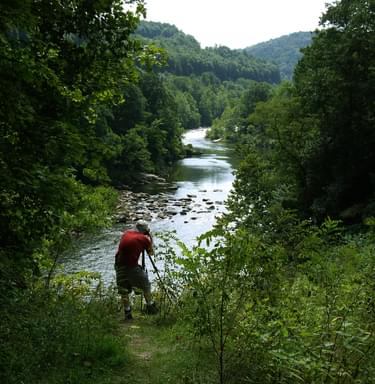 Prompted by the trail's success, there are now seven bicycle rental shops, several eating establishments, several motels, some bed and breakfasts, and some guest houses located in the vicinity of Ohiopyle. These modern businesses occupy quaint old surroundings to preserve the mountain atmosphere of the village. Traveling the trail, visitors will see small billboard signs advertising the local businesses located at each end of the trail. According to local business owners, these signs are successful in luring visitors off the trail and into their businesses located several blocks from the trail.

The Youghiogheny River Trail is part of the Great Allegheny Passage. The trail system, when finished, will provide a continuous path of 398 miles stretching from Pittsburgh to Washington, DC. Other trail segments include the Chesapeake & Ohio Canal Towpath as well as the Allegheny Highlands Trail in Maryland, and the Steel Valley Trail, Three Rivers Heritage Trail, Montour Trail, and the Allegheny Highlands Trail, all in Pennsylvania. 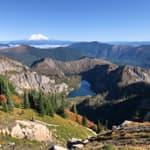 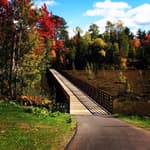 This multi-use trail runs more than 52 miles and is one of the longest paved trails in Wisconsin. 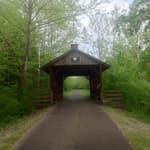