Wildlife And Trails Primer - A. Trails and their zones of influence

A trail’s area of influence should be planned and managed as an integral part of the trail. This influence zone should provide recreationists with meaningful interactions with nature, without infringing on sensitive habitat. 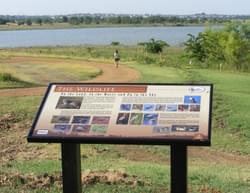 A trail's "Zone of influence" depends on many factors, but there is always an opportunity for educating the public.

As with anything we build in the landscape, a trail changes its surroundings.
Some of these changes are minor and temporary— such as when a deer moves away from an approaching hiker, to return to browse once the hiker has gone. Other changes have wider ramifications and duration—such as when aggressive bird species follow trails, expanding their habitat, displacing sensitive species, and preying on songbirds and other sensitive neotropical birds.

These changes to a trail’s surroundings may extend for hundreds or even thousands of feet on either side of a trail. (They are sometimes referred to as trail distance effects.)

Collectively these effects define a zone of influence associated with a trail. This zone is also the primary experience area for recreationists using the trail. Without wildlife in this zone, trail users would have a less diverse experience.

There is a natural variability to landscapes, so the width of a zone of influence varies along a trail’s length.

Some of the effects characteristic of a trail’s zone of influence are what biologists refer to as edge effects. Edges attract more generalist species at the expense of more specialist species, which have fewer options in increasingly human-dominated landscapes. (There are more and more ecological edges in the world as a result of increasing human development of all kinds.)

The specific edge effects of a trail and their associated widths depend on the characteristics of the trail (how wide it is and its type of users, for example) and the surrounding landscape (how sensitive local wildlife are).

Trailheads and other trail facilities, which have their own characteristics and impacts on wildlife, contribute to the extent of a trail’s zone of influence and should not be forgotten in the planning process.

A trail’s area of influence should be planned and managed as an integral part of the trail. This influence zone should provide recreationists with meaningful interactions with nature, without infringing on sensitive habitat. 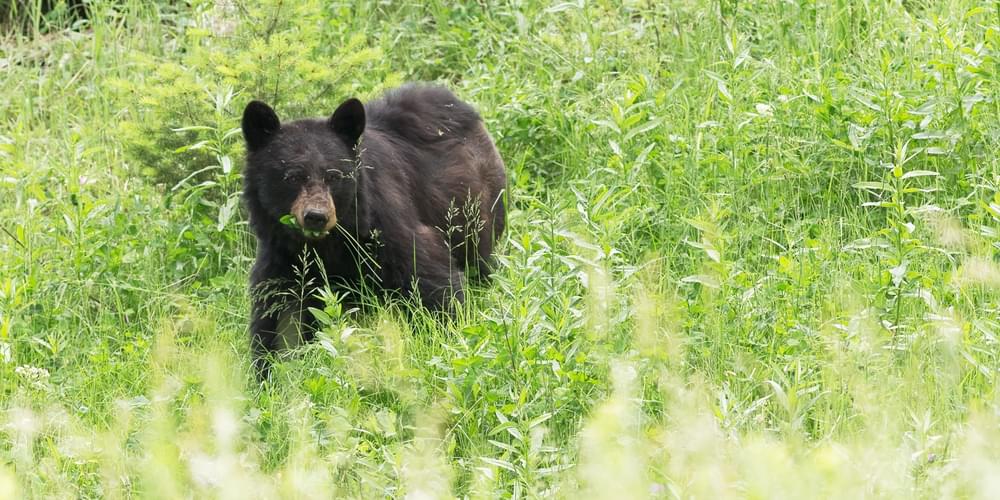 A. 1 - Always some impact.
Any trail will have at least some negative impacts on wildlife. Such impacts must be weighed with the benefits of the trail.

A. 2 - The broader view.
In considering wildlife, don’t focus solely on the narrow width of the trail’s treadway; also consider the wider area it may influence.

A. 3 - Sensitive vs. non-sensitive.
Trail corridors may encourage some species of wildlife, such as jays, raccoons, and other edge-loving generalists, but these species are already increasing across the landscape and may not need encouraging.

A. 4 - Negative effects.
Trails may negatively affect species that need conditions (such as specific vegetation or light) that are altered in trail construction.

A. 5 - Degraded areas.
Seek out degraded areas that have the potential to be restored when aligning a trail, rather than creating another disturbed area.

A. 6 - Edges.
Align a trail along or near an existing human-created ecological edge, rather than bisecting undisturbed areas. When this is possible, the trail will not create a totally new ecological edge.

A. 7 - Avoid sensitive wildlife.
Keep a trail— and its zone of influence— away from specific areas of known sensitive species, populations, or communities. Where appropriate, use glimpses of these areas as opportunities for educating trail users.

A. 8 - Think thin.
In constructing or upgrading a trail, disturb as narrow an area as possible to help minimize the zone of influence.

A. 9 - Screening.
Locate trails and supporting facilities in areas where they can be screened and separated from sensitive wildlife by vegetation or topography. This approach is less disturbing to wildlife and reduces the amount of energy wildlife must use in reacting to recreationists.

A. 10 - Rewarding trails.
Provide trail experiences that are diverse and interesting enough that recreationists are less inclined to create their own trails and thereby expand the zone of influence.

A. 11 - Predictability.
The more predictable human actions are, the more adaptable wildlife may be to those actions.

How wide an area will be influenced by a trail is determined by many variables in a complex interaction.
Some of these variables and examples of their effects on the interactions of wildlife and recreationists are shown below.(Adapted from Clinton Miller, City of Boulder Open Space, 1994)

VEGETATION - Some types of vegetation, such as dense forests, can visually screen trail users more than others.

WILDLIFE SPECIES - Some species are more sensitive to human activities than others.

SEASON - Certain times of the year, such as breeding season, may be more sensitive than others for wildlife. Also, during dormant periods, some plants may be less easily impacted.

TIME - During resting, feeding, or other specific times of the day, wildlife may be more susceptible to disturbance.

WEATHER - In cold weather, recreationists may have greater impact on wildlife because of the increased energy wildlife must expend to avoid the recreationists.

TRAIL/USER LOCATION - Wildlife may respond differently if trail users are above or below them, on or off a trail.

SURROUNDING LAND USE - Trail impacts may be less significant in an already disturbed area.

INTENSITY/LEVELS OF USE - More intensive or higher levels of trail use may have farther-reaching impacts.

PREDICTABILITY - The more predictable trail users are, the more likely their presence can be incorporated into the daily strategies of wildlife.

RECREATIONAL ACTIVITY - There is greater impact when recreationists bring along dogs. Also the speed of activity influences the level of disturbance.

[Older publications may be available from libraries and used booksellers. Titles with links may still be in print, or are available in electronic format.] 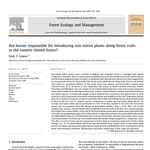