When Snowmobilers Meet Others on the Trail 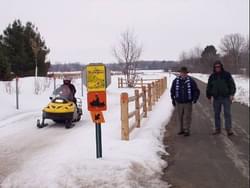 All winter trail users have the right to enjoy their chosen activity— and all agree that they would rather not have their rights restricted. Since trail encounters between snowmobilers and other trail users must be expected, people should respect each other's love of the outdoors and be considerate. That's not a rule, an enforceable law, or a line in a list of codified responsibility dogma. It is the way to live.

While the vast majority of encounters between different winter trail users such as dog sledders, snowshoers, snowmobilers and cross-country skiers are friendly and respectful, some conflicts occur and some resentments do exist. In addition, unsafe behavior such as reckless behavior or poor judgment can occur. These situations can be compounded by damaged trail surfaces, narrow passageways, conflicted trail uses or trail congestion.

Other factors that may contribute to a problem on shared trails include trail user speed, mass of user or vehicle, sight distances, size of the group, users overtaking one another silently or without warning, user skill and experience and user expectations and preparedness. Add to that people's different values and priorities and their tolerance for others' lifestyle choices and it's no wonder that you have a recipe for possible conflict.

In the other person's shoes

The most obvious way to prevent conflicts on the trails and promote safety is to learn and understand the perspectives of other trail users. For example, many cross-country skiers and snowshoers are not aware that snowmobilers must pay a State registration fee, which is allocated to trail grooming. Snowmobilers have worked hard to secure landowners' permission to develop networks of trails. If cross-country skiers do not want to mix with other trail users they have the option of skiing at "skier-only" commercial ski centers that groom specifically for skiing, where snowmobilers are not allowed. And there are state and national park areas that restrict snowmobiling, too.

But snowmobilers may not realize deep-rooted resentments that many skinny skiers have for the motorized trail users. Some skiers and snowshoers regard their solitude in nature as holy. They may feel that mechanized trail use is inappropriate and are angered by the inefficient two-cycle engine noise and exhaust. Snowshoers and cross-country skiers lifestyle perspectives may prevent them from ever being aware of the sheer joy a youngster experiences when (s)he rides a snowmobile for the first
time. Certainly, there is enough room and plenty of miles of trails where all trail users can be satisfied. And perhaps there are areas with separate trails that are primarily allocated to specific uses.

Trail users can encourage mutual understanding through the process of communicating and collaborating. The Lyme-Pinnacle Snowmobile Club in New Hampshire has discovered some success in attracting a membership comprised of one-third cross-country skiers. They regularly share the trails and they pitch in and help maintain them in the off-season, too. And there is more than one report of a lost cross-country skier or snowshoer, who was glad to see a snowmobiler, who provided safe transport back to the trailhead. Perhaps it's time trail users get into each other's shoes and try each other's activity. Work on joint projects such as trail maintenance, repairing a warming hut, deciding where routes are successful and where they are problematic.

What to do at a rendezvous?

The New Hampshire Fish & Game OHRV Operation and License Statue states: "Any person operating an OHRV shall yield the right-of-way to any person on horseback, foot, ski, snowshoes or other mode of travel on foot; provided however, that such persons traveling do not unreasonably obstruct or delay OHRVs on the trail." The law also states that the maximum speed limit unless otherwise posted is 45 miles per hour.

There may be a code, trail etiquette, or laws of the land for snowmobilers and other trail users when they come upon each other, but what really matters is that people just use common sense. For example, obviously snowmobilers should be prepared for anything when approaching a blind curve, which suggests slowing down, being aware and keeping the sled under control. Upon hearing the approach of a snowmobile, skiers or snowshoers should get off the trail in a place where they can be easily seen. They should give the snowmobiler room to pass, and be more wary if there are many people in either party. Skiers and snowshoers should also keep control of ski poles to avoid the sled as it goes by. Traditional yield rules and signage ask the machine operator to yield, but it is often easier for the trail user on foot (or ski) to step off the trail.

Cross-country skiers that use snowmobile trails often employ the skating method of skiing. This technique crosses the trail in a perpendicular fashion, substantially more than the traditional diagonal ski technique. The skater splays each sliding ski outward at an angle to glide longer and faster. This is usually an intense exercise and snowmobilers should be aware that skating skiers might not hear an oncoming machine very well. Their level of exercise and the sound of wind and sliding skis on crunchy snow can impair hearing somewhat. That is one good reason that snowmobilers should not assume that other trail users will always hear them coming.

According to Tom DiMaggio of the New England Sled Dogs Club, "Mushers (dog sledders) recommend that as they approach head on, other trail users should get to the side or off the trail and let the sled dogs pass. Slow down and watch for dogs stepping out in front of passing snowmobiles. If coming upon a dog sled from behind, snowmobilers should wait for the musher to wave them by."

It's best to try and communicate about each other's intentions. Keep in mind that the sled dogs will try to keep to the inside of the trail on a curve to find the shortest path, so snowmobilers should not automatically think that pulling off to the right is always the best option. Interestingly, horseback riders suggest that other trail users talk it up when they come face-to-face. It is important that the horse understand that you are a person and not some contraption. If snowmobilers look in the mirror, they'd understand that a horse might be spooked from their appearance. Who knows what the horse thinks of the machine? So, perhaps it is best to remove the helmet and say hello. Luckily, seeing equestrian enthusiasts on the winter trails is a rare occurrence. People familiar with the trail sharing issue will often refer to the fact that there are very few problems on the trails. A common phrase is that problems occur with "less than one percent" of trail users.

There is also concern about first-time users who might act recklessly out of ignorance. Skiers who ski on the snowmobile trails but are not aware of the issues discussed in this article are of particular concern, too. We must try to reach all of these "one-percenters" to prevent tragic consequences and keep the trails safe for all to use.

NOTE: This article incorporates information from Roger Moore's Conflicts on Multiple-Use Trails: Synthesis of the Literature and State of the Practice, a technical report underwritten by the Federal Highway Administration in 1994.

Roger Lohr lives with his family in Hanover, NH, and is an avid cyclist, snowboarder and cross-country skier. He serves on the NH Statewide Trails Advisory Committee and maintains the database of trail projects funded by the FHWA's Recreational Trails Program.