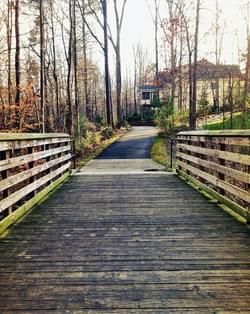 These perennial issues have been the subject of a few studies which find that trails are quite benign in their social impact. The facts haven't stopped groups organized against rail trail development from trumpeting that the few instances of crime are proof that trails are unsafe.

Homeowners nationwide express the same concerns and fears about proposed trails in their neighborhoods. But studies in various parts of the United States seem to show that concerns about trails lowering property values and increasing crime are unfounded. In fact, trails have consistently been shown to increase (or have no effect on) property values, to have no measurable effect on public safety, and to have an overwhelming positive influence on the quality of life for trail neighbors as well as the larger community.

1. The Effect of Greenways on Property Values and Public Safety; The Conservation Fund and Colorado State Parks, State Trails Program (1995)

"The study of Property Values and Public Safety was to determine what effect, if any, the presence of urban trails has had on public safety to property owners who live adjacent to a trail and on property owners who live within one block of a trail. The study also evaluated the level of public acceptance for urban trails and their effect on the quality of life in these neighborhoods...

"The need for the study arose due to concerns expressed by several different neighborhoods over the proposed construction of new trails. These concerns included fears that the presence of an urban trail might lower property values and also create a risk to public safety,

thus adversely affecting the quality of life in the neighborhood. These concerns are similar to concerns voiced in the past over proposed trails that are now established and accepted...."

Three Denver trails were studied in detail: "Data was collected in the summer of 1994 by telephone interviews of residents adjacent to or near to the trails, real estate agents who buy and sell homes in metro-Denver, patrol officers who work the trails, and biweekly surveys of the Denver Post Real Estate advertisements...."

Results of the survey show that "urban trails are regarded as an amenity that helps to attract buyers and to sell property. For residents of single family homes adjacent to a trail:

"Of the real estate agents interviewed:

"No public safety issues could be directly linked to the trail. Only one resident interviewed was concerned with this issue, and none of the officers interviewed believed trails had any effect on public safety....

"[In summary,] concerns that urban trails might adversely affect [sic] public safety and property value in surrounding neighborhoods are not substantiated by the results of this study. The effect of a trail is beneficial, rather than detrimental."

"The purpose of this study was to determine what effect, if any, a bicycle/pedestrian trail has on property values and crime rates. Concerns by local property owners that proposed trails may negatively affect property values or increase crime prompted this survey. Due to its 9 year existence, the Brush Creek Trail, built along Brush Creek in Santa Rosa's Rincon Valley, was selected as the focus of this survey....

"Seventy five residents were surveyed on how long they had lived in the neighborhood, how the trail has affected their overall quality of life; what effect the trail would have on selling their homes, what effect the trail had in their decision to buy their homes; how the trail has affected their privacy, and what problems, if any, they have had with crime caused by trail users. Additionally, interviews were conducted with apartment and mobile home park managers near the trail, real estate agents with listings adjacent to trails, and law enforcement agencies; fifteen other cities were contacted for information on surveys regarding the effect of trails on property values and crime..."

"The law enforcement agencies had no data to determine crime statistics; survey results from 15 other cities showed only a small number of minor infractions including illegal motorized use of the trail, litter, and unleashed pets.

"The study shows neither increased crime nor decreased property values due to trails. On the contrary, the most overwhelming opinion by residents along the Brush Creek Trail is that the trail/creek has a positive effect on the quality of life in the neighborhood."

"The effect on property values of a location near a park or open space has been the subject of several studies... Many studies have revealed increases in property values in instances where the property is located near or adjacent to open spaces..."

A 1978 study of property values in Boulder, Colorado, noted that housing prices declined an average of $4.20 for each foot of distance from a greenbelt up to 3,200 feet. In one neighborhood, this figure was $10.20 for each foot of distance. The same study determined that, other variables being equal, the average value of property adjacent to the greenbelt would be 32% higher than those 3,200 feet away.

A different 1988 Boulder study found that "the public cost for maintaining non-open space, such as developed acres, was estimated to be over $2,500 per acre, and could be as high as $3,200 per acre when utilities, flood control, transportation, and subsidiary governmental entities' costs are included. The cost for maintaining open space in the City was only $75 per acre, or less than three percent of the cost on non-open space..."

"The purpose of this study was to determine if such problems plague the adjacent and nearby residents of three Cary, North Carolina greenways... a survey of those living near the three greenways was conducted. Respondents were asked questions designed to reveal their satisfaction with the greenway, their initial feelings toward the greenway, the frequency of problems they experienced, their use of the greenway, and their perceptions of the effect of the greenway on their property value.

"The results of the survey, which achieved a 75% response rate, supported the hypothesis that most residents feel satisfied with the greenways and that problems are minimal.

"Planners should take care to instill positive feelings among affected residents toward a proposed greenway by involving them in the planning process, educating them on the benefits of greenways, presenting data that refute their fears of perceived problems, and calming their greatest fears of crime through crime prevention efforts. Reducing the number of occurrences of the most commonly reported problems will require adapting greenways to specific circumstances. For example, noise and loss of privacy problems may be ameliorated by increased buffers between the greenway and home, while open wood rail fences may more clearly signify property lines and reduce trespassing."